A Moratorium on Condemnation

An Interview with Andrew Marin
By David Crumm

The following first appeared at Read the Spirit. It is reprinted here as a part of the Consultation on Re-Envisioning the Relationship between Evangelicals and Gays. The Consultation invites a broad variety of perspectives on what that relationship ought to be, and how it can be made so. Check back for other articles and other perspectives in the days to come. 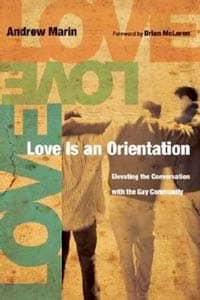 Let's call a truce! In short, that's what Andrew Marin is pleading in his new book, Love is an Orientation: Elevating the Conversation with the Gay Community. Bravely, Andrew Marin is telling the story of his own new approach to Christian ministry with gay and lesbian neighbors.

I'm pleased to talk with you today, Andrew. You're only 28 and yet you're doing pioneering work that is drawing support from a "Who's Who" of top figures in evangelical Christianity. Brian McLaren, Scot McKnight, and Shane Claiborne all show up on the cover of your book, urging people to read your story. So, let's start with your own religious affiliation. How do you describe yourself?

I don't align myself with any one denomination. I was raised in the Assemblies of God. When I got to college, I continued going to Assemblies of God, but then the church I was attending disbanded. Right now, I go to an Evangelical Free church.

Broadly speaking, I call myself evangelical. Based on the foundations of my faith, I look to -- and I trust in -- the Holy Spirit and the Bible. I was raised being taught that the Bible is the inerrant word of God. The Bible provides answers for life; the Bible is our center for getting to know God better -- and it's the way we learn how to deepen our relationship with Jesus Christ.

You're right. That's a pretty good description of an evangelical approach to faith. And you've got some remarkable friends for a young activist. How do you know Scot McKnight? You both live in the Chicago area, I know.

Scot's a really good friend. He teaches at North Park University in Chicago. North Park is about two miles away from my office, so a lot of the North Park professors have had a big impact in my life, including Scot and others. I'm in constant contact with them and they've been a gigantic support system for me. They mean the world to me.

People like Scot and Shane and Brian, who have endorsed your new book, are also veterans who have withstood the sometimes very harsh glare of the national media spotlight.

Yeah, I had no clue about the attention that comes with doing this kind of work at a national level. Every day for me now is a new experience trying to navigate all these different media.

The other day, I was in a suburb of Chicago and I went into a Starbucks and a barista was like: "Oh, my goodness! I just read your book and here you are!" That's never happened to me before.

As we're talking over the telephone right now, I'm in a hotel in Iowa traveling to talk about the book. I get fifty emails a day from people across the country who want to share their stories with me. This has been a good but sometimes overwhelming experience.

You've written this book after living for years in a unique part of the country: Boystown in Chicago. Tell us about Boystown. We're not talking about the home made famous by Father Flanagan and Hollywood.

No, this is different. Chicago is delineated into separate neighborhoods and Boystown was designated by Mayor Daly as the first incorporated gay neighborhood. It's run by the Northalsted Area Merchants Association. To run a business in Boystown, it has to be owned by a gay or lesbian person or you have to cater to gay or lesbian clientele. It's a neighborhood unlike any other in the country. The Castro is famous in San Francisco, but Boystown is even more developed, I would say. We don't have streetlights in Boystown. We have rainbow flags that light up.

You and your wife are living as minorities there, right? You're not gay yourself.

No. And I actually appreciate when people ask me that. I'm asked the question all the time and I want people to know: I'm not gay. I've never been gay. I've never had a same-sex attraction.