A week later, the disciples were once more in the room, and this time Thomas was with them. Despite the locked doors, Jesus came and stood before them. "Peace be with you," He said; then, to Thomas: "Take your finger and examine My hands. Put your hand into My side. Do not persist in your unbelief, but believe!" Thomas said in response, "My Lord and my God!"

Jesus then said to Thomas: "You became a believer because you saw Me. Blessed are they who have not seen and have believed." (from John 20:19-31) 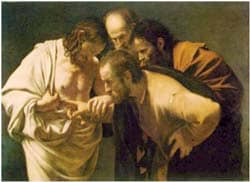 If you haven't seen the movie Doubt with Meryl Streep and Philip Seymour, watch this clip courtesy of YouTube, then go rent the whole movie and draw your own conclusions....

Wouldn't you ask for proof?  Wouldn't you want to probe the nail marks in his hands, or feel the bloody wound in his side where the angry soldier had pierced your friend with his sword?  Or wouldn't you at least suggest that this crazy person have another drink for you? I mean, who would have believed such an incredible tale?

The risen Jesus reminds us all, who have no proof for our Easter joy: "Blessed are they who have not seen and have believed."  That's you and me... struggling to be people of faith without proof in an increasingly "prove it to me" kind of world.

Many find it hard to believe today... not in Christ, or even in the theological concept of the resurrection. What many struggle to believe in these days is the Church. All the talk about clergy sexual abuse and the ensuing cover-ups make it hard for people to believe that the Church really is the Risen Body of Christ in space and time.  How can the Risen Body of Christ act this way toward the most innocent of its members and then protect the guilty?

And then I'm reminded of Thomas and the Risen Jesus again.  Thomas found his proof in the Risen Christ by looking into his wounds, by feeling them with his own hands, not by hiding them, or denying them, or covering them up.

I wonder what it must be like to put your finger in a nail mark, to put your hand into a side that has been sliced open by a lance.

Being a Catholic during this time of clergy sexual abuse feels like putting my hands into a gaping, bloody wound and being forced to leave it there, rather than recoil in horror. It means facing the woundedness of the Church, looking at her imperfections, her sinfulness, her gross failures...

How blessed are those who have not seen, and yet believe... indeed.

Father Mike Boutin is the co-pastor of the Church of the Blessed Sacrament, Walpole, MA, and travels widely, leading pilgrimages throughout the world to various Catholic religious sites. He is a frequent speaker on liturgy, music, spirituality, and pastoral ministry.