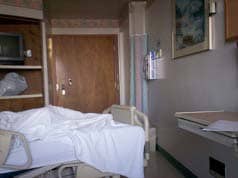 When I was six or seven years old, my father appeared in the doorway of our home like a wounded soldier.  This is literally how I have carried the memory: snow swirling around his bent body, strength evident even in its weakness.  I pull the thread of this memory, and knot it firmly to the next: my mother and I driving home from a Halloween party.  I had enjoyed this party, and I chattered about it. My mom told me that Dad might be upset about something, so when we got home he might not want to hear all the things I had to say. I drew back from this statement, as I had from the mysterious box of peeled grapes the older girls at the party had told me were human eyeballs.  When we arrived home, Dad was on the phone, and he was crying.  I had never seen him cry.  He told my mom he had lung cancer and she cried, and I didn't understand, but I did know a little about death so I asked if he would die, and he said maybe, and I cried. I remember crawling on my parents' shoulders like a squirrel, asking my difficult questions, crying.

What I know now is that all of these things did not happen at the same time, and some of them, like the crawling business or my father in a soldier's uniform, could not have happened at all.  My mind and my heart are strange jungles: fertile, impressionistic places, where just a suggestion is enough to bear rich fruit.

Be the trappings as they may, my dad had cancer.  He went into the hospital.  We went to see him.  I had a magazine I had purchased from the book club at school.  It was a seasonal magazine, with stickers and little stories and such, and this was the winter or Christmas edition.  I remember it very well because I usually did not buy the magazine; I preferred novels and consumed them, but for some reason this time I had picked the magazine.  I brought it to my father in the hospital.  I was anxious: would he like it?  Would it please him?  In the gift shop, Mom said I could pick something for him, and I chose a porcelain bag, carefully shaped with realistic bag-wrinkles in its stiff sides.  On the front of the bag, in pastel letters, it said "Get Well Soon."

My mother hesitated.  She fumbled with words about how, if a person might not get well, they also might not want a thing that tells them to get well.  Then she looked at me and told me to get it anyway.  Or maybe I insisted.  Or maybe I was ready to put it back, and she chose it for me again.  I don't know, but we bought the bag.

In the hospital, my dad prayed, and outside of the hospital, my mom and I prayed.  Somehow -- somebody mentioned her, perhaps?  my mom might have known of her, or a nun friend who saw the present and thereby the future (my dad was an alcoholic, and between him and my mom the space that continually widened would never truly be bridged) -- we got turned on to Mother Marianne Cope of Hawaii.  Well, originally, she was of Syracuse, NY, like us, and founded the hospital through which my mother received her nursing education, but she went to Hawaii to care for lepers, which she did with indefatigable grace.  We began praying to Mother Marianne, or, to be doctrinally correct, praying for her intercession.  I was six (or maybe seven), though, so I just prayed.

Later, my dad told me that he saw death, in the hospital.  That death came to him in frightening guise, all scythe and bone.  My father, then in his early 40s, reached out to embrace death, and death changed clothes.  Death became a beautiful angel.  I saw this angel, clearly, in my mind, and I see it now.  Shining.  Long hair, open, kind face.  White robes.  Surrounded by flowers like the romantic hero in a manga (Japanese comic), or the altar at Easter.  My dad saw his death in beauty, and understood that he had a choice.  That he could choose this death, or go on living.  He thought of me.  I am sure he thought of other things as well.  He chose to live.

After this, the doctors were doing a test on my father, or perhaps it was an X-ray, and they found something astonishing.  The cancer was gone.  The cancer, it seemed, had never been.  Instead, my dad had pneumonia.

To this day, I find it difficult to perceive pneumonia as anything other than beautiful, friendly, and benign.  My father came home.  I remember him lying on his stomach while my mother walked on his back to push the bad fluids out of his lungs.  The literal details of this, again, seem improbable, but that is what I recall.  My father got well.