Seminaries Shack Up: The Trend toward Multi-Faith 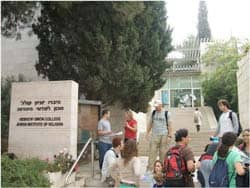 Even before the financial crisis, many seminaries were in trouble. Donations were down, tuitions were up, and the news they most often made was not positive. When the crisis hit, rumors abounded that they might be down for the count. Some might well be. But others have responded in an ingenious way: institutional intermarriage. A new generation of seminaries, often engaged before the crisis but wed in its midst, is emerging from the "Great Recession" renewed.

Seminary administrators may boast of 'increased efficiency' and a 'wider course selection.' But what really counts is that graduates of these schools are going to be the best able to lead their congregations and religious movements within a pluralistic society. What began as marriages of convenience are on track to redefine the scope of religious leadership.

Take for example this very real scenario. A new rabbi is hired to lead a congregation that just so happens to be just up the street from a mosque. How will she interact with its imam?

If trained in a single-tradition institution, she has four options in her repertoire: say something awkward, say something offensive, by some incredible miracle or spark of brilliance find something all right to say, or -- by far the most popular -- not say anything at all. While she may run through scenarios about what she could say to the imam, she is likely to be risk averse and worried about causing a stir. Inside her mind, questions will abound: "Do imams like deli sandwiches? Matzah ball soup? Can I invite the imam to join me for lunch at Katz's? Would he be upset if we ran into my Israeli friends there?"

By contrast, a rabbi who deepened her devotion to Judaism while studying on a multi-religious campus would probably have at least some basics down: "Many Jews and Muslims abstain from eating pork. Want to throw a mean Kosher/Hallal barbecue for our congregants together?"

The topic of both interactions is the same (yes, as a future rabbi myself, food came to mind first), but the substance is quite different. In the latter case the rabbi and the imam actually have something to talk about. When religious leaders don't know the basics about each other's beliefs, there is no basis for conversation, much less opportunity for collaboration between their congregations. That absence or presence of knowledge is determined by the seminary education that each clergyperson receives.

Two of the leaders in the multi-faith seminary movement are Hebrew College and Andover Newton, which share a campus in the Boston area. The former is a non-denominational Jewish seminary, while the latter is an interdenominational Protestant institution. Since the start of their formal partnership in 2002, the two schools enjoyed cordial relations. They held some joint programs, brought together members of the faculty periodically, and mostly just resided in close proximity and let interactions and programs take place organically.

Over time, however, that relationship became far more intentional. Under the leadership of Rabbi Or Rose and Dr. Jennifer Peace, the two schools founded the Center for Interreligious and Communal Leadership Education (CIRCLE) in 2008.

According to its website, "The presence of the religious 'other' throughout a student's education requires the aspiring rabbi, minister, cantor, or educator to articulate his or her religious commitments with clarity and conviction, while remaining open to learning from people with different beliefs and practices."

What was a multi-faith educational experience by default -- and as some cynics might argue, one of need rather than choice -- became a fixture of the educational programming at each institution. Everyone benefited.

While I doubt that students at Andover Newton and Hebrew College or other, similar institutions stand around for large portions of each day hugging and singing Kum-ba-ya, neither do they study under the false pretenses that their religions exist in a vacuum. The choice for seminaries to shack up may look like an accident or necessity to the passerby. But it now sets them apart from their peers.