By Yosef I. Abramowitz

My wife and I have several Jewish female friends in their mid‑30s who are still single. Our Shabbat talk inevitably always turns to the people they are dating and how difficult it is to find a nice, Jewish guy with which to start a Jewish family and raise Jewish children. One unpartnered friend, a rabbi, flew to Israel for in vitro fertilization and is now pregnant. "I wish I was married by now. But since I'm getting older and haven't found a soul‑mate yet, I'm going to start my own family," she says. 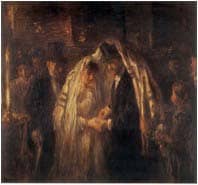 These Jewishly‑committed single women have other options, but these are not sanctioned by the Jewish community. It is time to remove the stigma prohibiting them from dating and marrying non‑Jewish men. The word "intermarriage" has been the convenient scapegoat for many of the ills in American Jewish life. Countless sermons have been wasted on this topic, and its specter has launched numerous fundraising campaigns for institutions that usually have little clue about how to creatively adapt to a changing community. So many of our Jewish leaders and even major philanthropists are finding that their grandchildren are not necessarily being raised Jewishly.

But not every interfaith marriage is a threat to Jewish continuity. My wife, who is a rabbi, generally does not officiate at interfaith weddings. But when a widowed, elderly Holocaust survivor and close family friend wanted to marry another close friend, a non‑Jewish woman, she gladly agreed to participate in the ceremony. Which value is more Jewish? Holding the Jewish community's line on not performing interfaith marriages or the happiness of this couple? If my wife were a member of the Conservative Rabbinical Assembly, even attending this wedding would be grounds for expulsion. The rabbinate, like life, is filled with gray areas. The Jewish community is very good at dealing with black and white issues like anti‑semitism, but in this case lacks the skills, courage, or tradition of dialogue to deal with gray areas.

One way of adapting would be to sanction, even encourage, Jewish women in their 30s to date and marry non‑Jews. I am not suggesting that it is preferable for Jewish women to marry non‑Jewish men, although I have seen a fair share of religiously unenthusiastic Jewish men hold back their wives' spiritual quests. I do believe, however, that it is clearly preferable for single Jewish women in their mid‑30s to marry non‑Jewish men who are supportive of their spiritual journeys and who will raise halachically‑recognized Jewish children, instead of these women remaining single. Rejecting this idea suggests that the community is not concerned about the happiness and self‑fulfillment of many of its most committed members. To denounce this idea also fails to recognize an important yet largely unstudied area in Jewish life: that women, more so than men, bear the future of Jewish spiritual life.

According to Sylvia Barack Fishman of Brandeis University, the percentage of bar to bat mitzvahs has recently tipped, for the first time, to more girls affirming their commitment to the Jewish people than boys. This is a remarkable development given that the bat mitzvah is a 20th-century innovation. Check out nearly every Jewish teen program and there is a gender mismatch: 60 percent girls to 40 percent boys, sometimes even higher, like in Brandeis University's Genesis Program [for teens], which attracted 40 girls and 20 boys this past summer. The imbalance applies to Israeli programs, camps, youth movements, and non‑Orthodox day schools, and has tremendous implications for the future of Jewish life. Even the Maccabia sports games attract more girls than boys.

The implications of the gender gap in Judaism are great and extend far beyond the teen years. Synagogue membership and attendance are higher for women. Interfaith marriage is about 20 percent lower for Jewish women than Jewish men. Personal religiosity, home rituals, participation in adult education, and other indicators of commitment to Jewish life tend to be higher for women than men. A comprehensive 1997 survey by the American Jewish Committee found that the feeling of being Jewish is "very important" in the lives of more women (60 percent) than men (41 percent).

Empowering and embracing Jewish women as spiritual ambassadors of the Jewish people to potential non‑Jewish mates is a mitzvah on many levels. First, they will be better able to participate in the commandment to "be fruitful and multiply," either by childbirth or adoption. Second, it allows our community to grow in strength and numbers, thus creating a critical mass of people to sustain our institutions, traditions, and values. Third, the impact of this kind of sanctioned intermarriage on the Jewish gene pool is positive, thus lowering the chances for couples to face impossibly painful decisions about abortion of fetuses that would be born with Tay-Sachs or other debilitating genetic diseases. Fourth, it sends an inclusive message about Jewish living to unaffiliated Jews who once wrote off the community as being out‑of‑touch, parochial, or racist. I would rather dance at the interfaith wedding of my Jewish female friends who will raise Jewish children than continue to cling to an outdated communal expectation that perpetuates loneliness, lacks compassion, and is bad Jewish public policy.

Yosef Israel Abramowitz is a writer and serial social entrepreneur in the Jewish and social justice realms. He is the co-founder of Jewish Family & Life! and he has produced much of the content for BabagaNewz, JVibe, JBooks, SocialAction.com, and Sh'ma.