Tales from the Crypt

Musings of a Meandering Pilgrim
By Rebecca Cole-Turner 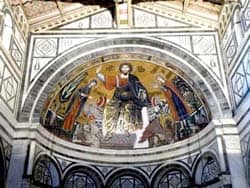 This is the fifth in our "Musings of a Meandering Pilgrim" series, in which spiritual director Rebecca Cole-Turner shares reflections from her pilgrimage to Italy.

How do we say farewell to Florence? We decided that attending Vespers with the Olivetan monks of San Miniato al Monte (St. Minias on the Mountain) followed by sandwiches and a bottle of wine on the steps of Piazzale Michelangelo overlooking the city would be perfect.

A soft, warm breeze was blowing as we entered the dark basilica. San Miniato sits a few hundred feet above Florence, across the River Arno and up the hill to the southwest. According to pious tradition, Minias was an Armenian prince, a Christian, serving in the Roman army and stationed at the obscure encampment that became Florence. When he began to live as a hermit, the Roman Emperor condemned him to death ad bestium, by wild beasts. He was tossed into the amphitheater to face a panther, which did not harm him, and so in frustration the Emperor beheaded him. Determined to get back to his hermitage, St. Miniato is said to have picked up his head and walked up the hill with it tucked under his arm!

In the 8th century, a shrine was built to honor St. Miniato and his martyrdom where his hermitage had stood. The current basilica, one of the most beautiful Romanesque churches in Tuscany, was built beginning in 1013 and originally housed Benedictine monks. Today the white robed and hooded Olivetans inhabit the monastery and make delicious honey, fragrant essential oils and soaps, and delicious teas and tisanes, which are sold in their store out in front of the basilica. Porte Sante, the large cemetery there, is the final resting place of such people as the creator of the story "Pinocchio."

Of special interest to me in attending the service was that I had read that almost 1,000 years before our visit, a vibrant woman named Matilda of Canossa had also worshipped here. During our stay in the city, I had the pleasure of meeting Michele K. Spike, author of Tuscan Countess: The Life and Extraordinary Times of Matilda of Canossa, an enlightening book about the life of this brilliant, beautiful, and powerful woman of faith. I had just finished reading this delightful, well-researched book about the intriguing Countess, who lived from 1046 to 1115.

According to Ms. Spike, in a time when women could not inherit property, Matilda became the companion and collaborator of Pope Gregory VII, a descendant of the wealthy banking family, the Pierleoni, who converted from Judaism to Christianity. Their decade of close alliance helped set in motion events within the Catholic Church and all of Italy and beyond that still influence the church today. Matilda was a woman whose enormous wealth and property was first controlled by her two husbands in loveless, arranged marriages, and then by her cousin, the German King Henry IV, with whom she warred for many decades.

According to the author, by the end of her long and eventful life, Matilda was said to have donated the money to plant hundreds of churches all over Italy and to have kept Gregory's memory as well as their plans for the Catholic Church alive. Matilda is one of just a handful of women to have the honor of being buried in St. Peter's in the Vatican, where her sarcophagus and a statue in her memory can be seen today.

As we walked down the side aisle of the church, with Michelozzo's stunning Cappella del Crocefisso (Chapel of the Crucifix) standing in the nave, I saw the glow of candles being lit for the service held in the crypt. The design of San Miniato is very unusual, a kind of split-level, with the crypt half a floor down from the nave below the elevated choir. I imagined Matilda and her retinue, gowned in rich robes and jewels, descending the steps into this crypt, filled with the rich voices of the monks singing their peaceful Gregorian chants and saying their prayers to God, as they still do today a millennium later. A sense of timelessness and intense beauty filled this space around me as the chants were lifted up in praise of the One who is both the Alpha and Omega, and I gave thanks for this time of extended pilgrimage among the living and the dead who live in Christ.