An Unconventional Marriage: A Judeo-Christian "I Do"

Leanna: When Rinat and I first got together, my church really encouraged us to go on the couple's retreat. I was hesitant of course. My pastor pulled me aside to make sure we felt comfortable and let us know that they were trying to be inclusive. It took me a moment to realize that he was talking about our interfaith dynamic, not the gay dynamic. My church has embraced us. Or mostly embraced. There have been a few hurtful moments along the way, but I think they got there in the end. My pastor came out of the closet the week my son was born almost two years ago, which was shocking to me.

If you have children, how do you raise them within a multi-faith household? How have the kids responded? How do you approach disagreements over child-rearing?

Rinat:  We are at the beginning of this long and what I can assume is a complicated road. We both want to raise our son (who's almost 2) with religious traditions and right now we're incorporating both traditions. I suspect this will get more complicated the older he gets when he shows a preference for one over the other, or is influenced by his cousins on both sides. It'll be interesting. All we know for now is that we're going to try to stay open to what feels right for our family.

Where do you notice your faith "difference" the most? The least?

Leanna:  I feel like we're going to face the more difficult decisions in the future. So far, it's been pretty chill. But as our son gets older and asks questions, or his cousins talk to him about it, I think the uphill is coming. Maybe not, but I suspect it is.

Rinat: My faith feels like it's woven into my past. It manifests in the intonation of my voice, the kind of food I eat, etc. Jews, especially in Liverpool in the 80s where I was raised, were a minority. This made us cling to this identity even more closely. I feel like Leanna's faith was somehow more mainstream and the norm, being from Orange County. I almost feel like I have a defensiveness or protectiveness about my religion that crosses over into wanting to preserve that heritage for my son. Even though I realize that by being raised in Los Angeles, he's not quite the minority that I was.

How did you blend your religious rituals and customs in your wedding?

Leanna:  The great benefit to having a gay wedding is that it's so out of the box (or it was at the time, before it was legal anywhere), we felt totally free to re-invent it and take the parts that were meaningful for us. We were married by my pastor, under a chuppah that our parents held. Marriage in the eyes of God, not the law.

One concession -- we chose to leave out the name Jesus, stick with the word G-d. That was the hardest part, because I'm such a fan of his. But I didn't want Rinat's family to feel really uncomfortable. One of the coolest things is we did is our version of the seven brachahs. We had seven friends talk each about seven qualities that we wanted to be reflected in our marriage. Rinat's brother, a Hasidic orthodox man, read from the Pirkei Avot. His family didn't come, and one of my sisters didn't come. But we really didn't let it cloud the celebration. We had a great time.

Actually, when we were able to get married legally, four years later, my Presbyterian ministers declined to marry us officially. I think I'm still a bit hurt by that, although they both told me they would do things differently today.

A friend asked a friend to officiate, but it's not the same when it's somebody you don't know. Rinat was two days from giving birth to our son, so we got married the first day they passed out licenses in California. We didn't have time to wait for my pastors to figure out their legal stance on it all.

Have your basic beliefs regarding matters of faith changed since marriage?

Rinat:  Yes. It's not so much since marriage, but since becoming parents. I realize how much my religious upbringing informed who I am today. I really think it provides a solid moral foundation that I would love to share with my son.

Leanna: Well, I've read more Jewish writings and have been inspired by them. Like Abraham Joshua Heschel. He feels like a kindred spirit in the same way my whole spirit responded to Henri Nouwen's writings years ago.

Do you feel that the passion or completeness of your faith has diminished since marriage?

Do you feel your partner supports you in your faith journey? 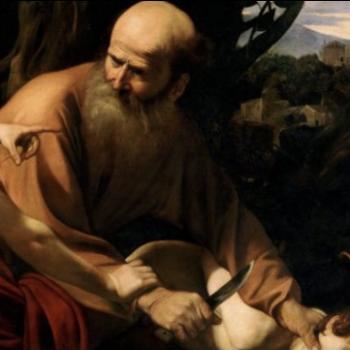 The Secret Story Behind the Resurrection of Jesus
Tom Rapsas
Get Patheos Newsletters
Get the latest from Patheos by signing up for our newsletters. Try our 3 most popular, or select from our huge collection of unique and thought-provoking newsletters.
From time to time you will also receive Special Offers from our partners that help us make this content free for you. You can opt out of these offers at any time.
see our full list of newsletters
Editor's picks See all columnists