Worth the Risk: A Mormon-Muslim Marriage

As part of the Public Square on Interfaith Marriage this week, Patheos invited several interfaith couples to share their personal stories with us. Here, Sylvia Cabus, a Mormon convert from Catholicism, and Mohamed Ahammam, a Muslim, discuss the joys, challenges, family issues, places of differences as well as commonalities and other aspects of being married to someone of another faith. 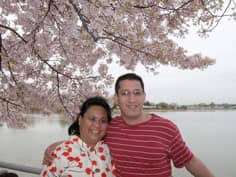 Tell us about how you met and if there were initial concerns about dating someone of a different faith.

Sylvia:  Mohamed and I met when we were both working for Catholic Relief Services in Morocco. I was the program officer based in the capital, Rabat, and he was working in the field office in Tiznit, about eight hours' drive south of Rabat. I visited Tiznit regularly and that is how we got to know each other; although when we first shook hands I experienced a little electric shock! Demographically speaking, I already knew it was unlikely that I'd marry a fellow Mormon, and I was open to relationships with members of other faiths, but I didn't expect to fall in love with a non-Christian. I reflected about our relationship a lot, and we even saw a marriage counselor, and in the end I decided that Mohamed was worth the risk. Since I didn't grow up Mormon, I did not feel the same pressure to marry in the temple, for example. Although once in a while I think about the eternal implications of not having a temple marriage, I am also confident that there will be a special dispensation for couples like us.

Mohamed: I met Sylvia when she came to visit a field project when she was a program officer with Catholic Relief Service / Morocco. As Islam permits dating "People of the Book" (Jews and Christians), it was not an issue to date Sylvia. In addition I grew up in a moderate family that doesn't see other religions as evil.

How did your families respond? What, if any, concerns did your parents or family members have?

Mohamed: My family responded positively with full support. I remember that my mom insisted that I treat her fairly. Most of my family expected me to be married outside our hometown, because I was the only child who went to University.

Sylvia:  It helps that as a Mormon-Muslim couple we have very similar lifestyles. I don't mind tea in the house and Mohamed doesn't mind if I eat pork, and neither of us drink or smoke. We have very similar values, and even some of the specificities of our respective faiths are mutually understandable. For example, there are many striking parallels between temple worship and the Hajj pilgrimage, so I feel that Mohamed has a greater understanding of what that means than if he were another type of Christian. I also think that since we come from different faith traditions, I don't feel "competitive" with him about my religion. I don't have to prove that "my" Christianity is better than "his," which is what I see with other Christian interfaith couples. Lastly, Mohamed comes from a very secular region of Morocco, and I was not raised Mormon, so we don't have the same cultural baggage as others do.

Mohamed: As a Muslim-Mormon couple, we share a lot of things. For instance we don't drink and smoke. In addition we respect each other's beliefs. Sylvia buys my tea when it is needed, just as I pay for her pork dishes when we go out.

Sylvia:  I am more active in my church than Mohamed is as a Muslim. He accompanies me to church social events, and I help him celebrate major Muslim holidays such as Eid. We also have our own traditions; for example, on Christmas Eve, Mohamed reads the Mary chapters of the Koran, which is very close to the account in Luke.

Mohamed: I go to the mosque during the major holidays in Islam like the last day of Ramadan. I visit Sylvia's church when there is any social event (for food).

Sylvia:  We are lucky to live in Washington, D.C., but even when we were in Little Rock, AR neither of us encountered any negative comments or experiences. In fact, I was touched that in my congregation in Little Rock a gentleman came up to me and said he'd heard that I was married to a Muslim, and that he was a butcher and knew how to perform hallal slaughters. I also feel fortunate that I have met other Mormon-Muslim couples, and an annual Mormon-Muslim Ramadan dinner. The LDS Church does a lot of outreach to Muslim communities, and also financially supports Islamic Relief in its humanitarian work, so I feel that I am also supported institutionally. However, I still feel that interfaith marriage resources are primarily concentrated on Jewish-Christian couples.

Article Continued On Next Page
Page: 1 of 2
4/29/2010 4:00:00 AM
About Kevin Juhasz
Kevin Juhasz is a content manager with a Colorado-based marketing company and the owner of <a href="https://www.thewritecontent.net/about">The Write Content</a>, which provides writing and editing services. He has more than 25 years of writing and editing experience with websites, newspapers, magazines, trade publications and more. Kevin has covered news, sports, entertainment, technology and a wide variety of other subjects.