"I can't feel anything.  I can't see.  There's just nothing.  Maybe I'm dead.  Dear God, please take care of my wife Ruth, my mother, and my brother, please keep them safe.

"I feel myself falling out of limbo, and back to earth, and I realize I'm still alive.

"I couldn't bend my arm.  I looked at my feet, where my man was laying, and he had a big sliver of steel right through his stomach.  He's dead.  I got a fragment in my right eye, and I'm bleeding all over.  I bend my head, so I can look out of my left eye, and this kid [gestures to his right] was dead.  I was wounded in the leg, and all over.  And I realized that if I just laid there, I would die.  But I wanted to survive.  I wanted to get back and make love to my wife!

Doctors did their best to heal Scheffel and return him to conflict, but his trigger finger had been blown off.  Charlie Scheffel was sent home.

He hadn't seen America for two years.  He was sent to a hospital in San Antonio to recuperate from his wounds and begin the adjustment to civilian life.  He and his wife had both been through a lot of changes, and he was nervous.  At a loss for words, all he could think to say to her was, "Well, your husband's home, so quit your job and come on down."  And she said, "I'll be on the 3 o'clock train the day after tomorrow."

"That's all I needed to hear," Scheffel recalled.

With his wife on her way to San Antonio, Scheffel needed to find a hotel room for them.  But lots of soldiers were recuperating in the town, joined by their families.  There was not one hotel room to be had.  After two days of searching, Scheffel sat down in the lobby of the Saint Anthony Hotel, "hoping for a miracle."

"And while I'm sitting there in this hotel, three hours before my wife was to get here, a guy walks up to me.  And he said, 'Captain, you look like a man that's in trouble.'  And he walks off.  He came back about two minutes later, and he said, 'Captain, hold out your hand.' I couldn't believe it.  He laid the keys to a room in my hand.  So when I saw my wife and hugged her, I told her, I said 'Honey, we have a room in the Saint Anthony Hotel.'  And we went there, and what had this guy done?  We stayed in a suite that night.  My wife gave birth to our first child nine months to the day after that night.  True story."

Charlie and Ruth Scheffel were married until her death in 1999.

When we say something is a miracle, we mean that it's a wonder, a marvel, an event that surpasses all possible human power and therefore must be a work of God.  When so much of human ability and genius is focused on killing and destruction, it is a wonder to survive and to feel the kindness of strangers.  It presents an alternative to the sheer brutality of war.

Anything that can do that is truly a miracle. 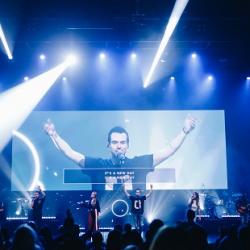 Assault Guns for Jesus
James Haught
Get Patheos Newsletters
Get the latest from Patheos by signing up for our newsletters. Try our 3 most popular, or select from our huge collection of unique and thought-provoking newsletters.
From time to time you will also receive Special Offers from our partners that help us make this content free for you. You can opt out of these offers at any time.
see our full list of newsletters
Editor's picks See all columnists