An Amazing Melting Pot of Religions and Faiths

"An Amazing Melting Pot of Religions and Faiths":
Miss USA Rima Fakih Talks with Patheos about her Faith and Family 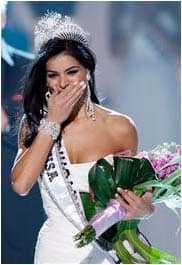 As soon as Miss Michigan, 24-year-old Rima Fakih, was crowned Miss USA, the rumors and allegations started to fly. Professional controversialists immediately wondered whether she was a supporter of the radical Islamist group Hezbollah, or whether her victory was due to affirmative action being played out in a beauty pageant.

Americans aren't used to seeing an Arab, or a Muslim, or a Middle Eastern immigrant being crowned Miss America. Yet Rima Fakih fits all three of those labels. She's also a "proud American" and a graduate of the University of Michigan who plans to attend law school. As newly crowned Miss USA, and a contestant in the Miss Universe competition to be held later this year, Rima will continue to confront and confound racial and religious stereotypes. Patheos' Director of Content, David Charles, spoke with Rima about her faith, her family, and the challenges of being the first Arab-American and Muslim Miss USA.

Congratulations on winning the pageant, and thank you for talking to Patheos.com today. So, is it true, are you really a spy for Hezbollah?

Your victory seems to have caught many people off guard -- it seems that no one expected an Arab, a Muslim, a Lebanese American to win the Miss USA pageant in 2010. What's your reaction to that?

I don't know why people are so surprised. I mean, I'm an American and a Lebanese, but I'm an American first, and everyone in America has their own ethnicity and comes from a different background . . . we all come from somewhere. We don't know who we are until we know where we came from.

For many Americans, yours is a very complicated identity, given the associations many Americans have regarding Arabs, Muslims, and Middle Easterners. Do you intend to use your platform as Miss USA to educate Americans about Arabs and Muslims?

Well, I'd like to say it's where we came from, to correct that comment. I believe that religion doesn't define me and it does not define my family. We have an abundance of faiths, and we respect all religions. Yes, we're a Muslim family, but we're also very cultured and we have a mixture of different religions. For example, my brother-in-law is Catholic, and my sister converted and my nephews are baptized. I have an uncle who just graduated and currently he's a priest. He's going to be transferred from Ohio to New York shortly, so I can't wait to see him and my cousins. As you can see, we have a very wide range of family. I even have two cousins here in New York City who are Jewish. As you can see, my family is just an amazing melting pot of wonderful religions and faiths.

It seems that you also have some educating to do in terms of explaining to fellow Arabs and Muslims that there are different ways to be Arab, to be Muslim; not all Arabs, not all Muslims have the same beliefs and practices and attitudes. Is that accurate?

It's very accurate, yes, in the sense that there's a stereotype. Every ethnicity has a stereotype, and I believe that Arabs have that as well, especially after 9/11. I never understood the whole speculation around 9/11. It involved someone who was not [Muslim]. They might have believed, in their wrong minds, that they were Muslim even though they were completely doing everything against the Muslim faith. They were Arabs, but Arabs felt fearful, they felt they were going to be pointed at. I'm hoping to take away that fear, to remind them that America is still built on freedom and opportunity.

How do you respond to criticism from conservative Muslims? One Muslim woman, for example, recently questioned whether what you've accomplished represents the right kind of integration into American society, and whether you're the right kind of role model for Muslim girls. She used phrases like "We [Muslims] also get to have our bodies paraded like horses on expensive Vegas casinos!" and suggested that now a Muslim, too, has been "subjected to the same exploitative enterprises as some white Christian women." How do you respond to Muslims who say that your victory isn't such a great thing for Muslim Americans after all?

I feel bad for that person. One, because it is believed in the Muslim faith that if you are prejudiced or racist toward other faiths, other religions, then you're causing sin. She's stereotyping other ethnicities. She's not only discriminating against me, she's also discriminating against the fellow contestants I was with. If she feels conservative, if she feels that she disagrees, then turn off the TV since it's obviously something that she doesn't believe in. However, not everyone is conservative. We're also majority liberal.
Article Continued On Next Page
Page: 1 of 2
5/27/2010 4:00:00 AM
About