By the Mainline Protestant Portal Team 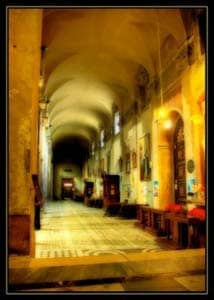 Much has been written about the incompatibility of religion and science and the ways that science might threaten Christian belief. In this week's Patheos Public Square on Religion and Science, more than a few authors offer compelling arguments for forging a more dynamic relationship between science and faith. In his article "Living in the Intersections," theologian Philip Clayton challenges us, as curious and faithful Christians, to engage the big questions of science and religion and move beyond the stalemate "if for no other reason than for the sake of the planet." He concludes with an exhortation "to think about these issues, engage in discussions with friends, read books, blog, and comment on blogs; ask your pastor, rabbi, and other religious leaders to engage the questions, not flee from them."

In response to Clayton's -- and others' -- passionate plea for intentional and charitable conversation in this arena, we invited several leading thinkers in the religion-science dialogue to offer a response from their particular fields of study to the following questions:

"What -- if any -- are the contributions science might make to Christian faith? How has Christianity benefited from the advance in scientific knowledge, or how might it benefit?"


"Nothing in recent experience provides more of an incentive to expand our awareness of the scope of divine creativity, or if you will, our sense of divine Mystery, than the discoveries of modern and contemporary science." Read the full response.


"If we look at the figure of Jesus in the Gospel of Mark we find that the majority of his actions are to "heal the sick and help the suffering." In the book of Acts the disciples follow the same path. Science, through its offspring of technology, gives us tools to do likewise." Read the full response.

Blake Horridge, Registrar and Director of Academic Administration at the American Baptist Seminary of the West in Berkeley, CA


"Until Christians begin to take science seriously, we won't hear a genuine prophetic voice from the Church on issues like stem cell research or the development of new energy sources." Read the full response.

Michael Zimmerman, founder and director of The Clergy Letter Project


"What's absolutely essential is for people to recognize that there is nothing about science that should threaten anyone's religious worldview." Read the full response.


"Even though a culture war is being fought over the credibility of Darwinian evolution, virtually no religious person finds science in general incompatible." Read the full response.
Article Continued On Next Page
Page: 1 of 4
5/21/2010 4:00:00 AM
About