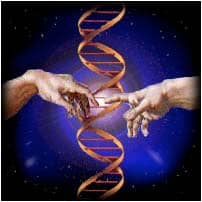 Is Christianity necessarily at odds with modern evolutionary science? If you only listened to the loudest and most fundamentalist voices in America, you certainly couldn't be faulted for concluding that the chasm between the two is huge and unbridgeable. Albert Mohler, president of the Southern Baptist Theological Seminary, for example, is very clear about his convictions:  "Given the human tendency toward inconsistency, there are people who will say they hold both positions," Mohler writes. "But you cannot coherently affirm the Christian-truth claim and the dominant model of evolutionary theory at the same time."

The reality of the situation, however, is dramatically different. Indeed, there are thousands upon thousands of Christian religious leaders from a host of denominations, including some Southern Baptists, who are absolutely certain that evolutionary biology and Christianity are compatible. These Christian leaders go beyond merely asserting compatibility, however. They actively "urge school board members to preserve the integrity of the science curriculum by affirming the teaching of the theory of evolution as a core component of human knowledge."

Who are these clergy members who are willing to stand up and take what might seem to some to be a surprising position? They are all members of The Clergy Letter Project, an organization I founded in an attempt to demonstrate that fundamentalists are not speaking for most Christian clergy members.

The Christian Clergy Letter, written by a United Church of Christ minister, is a simple but eloquent two-paragraph note making it absolutely clear that scientific advances and faith can go hand-in-hand. In addition to the directive to school boards mentioned above, The Letter states, "Religious truth is of a different order from scientific truth. Its purpose is not to convey scientific information but to transform hearts." It goes on to say, "We ask that science remain science and that religion remain religion, two very different, but complementary, forms of truth."

What's so very exciting about this initiative is that the more than 12,500 Christian clergy members who have signed The Clergy Letter represent incredible diversity along almost any sociological axis imaginable. Some of those who have signed work at our country's largest cathedrals while others work in tiny, rural parishes; some are socially liberal while others are conservative; some were ordained fifty or more years ago while others have only recently achieved that milestone. Men and women of all races and ethnicities representing every state in our country are represented. Similarly, a huge array of Christian denominations are represented including, but not limited to, Baptists (American and Southern), Catholics (Apostolic and Roman Catholic), Disciples of Christ, Episcopalians, Lutherans (ELCA and Missouri Synod), Mennonites, Methodists, Presbyterians, Swedenborgians, and Unitarians as well as members of the African Methodist Episcopal Church, the Association of Unity Churches, the Church of the Brethren, the Church of Jesus Christ of Latter-day Saints, the Church of Religious Science, Metropolitan Community Churches, the Reformed Church in America, the Religious Society of Friends, and the Worldwide Church of God.

In addition to their belief that a proper understanding of religion and science can actually enrich both fields, there are only two factors that these Christian leaders have in common.  Each has a deep and abiding religious faith and each has devoted a significant portion of her/his life to the teachings of Jesus Christ. These Christian leaders demonstrate through their actions and their lives that those who claim that Christianity and science must be in conflict are simply wrong.

Jewish rabbis and Unitarian Universalist clergy members were so impressed by The Christian Clergy Letter that each group has created its own parallel letter to assert compatibility across disciplines.

That scientific leaders feel similarly can be seen by their participation in The Clergy Letter Project. Over 880 scientists from every state and 30 different countries have signed on to The Clergy Letter Project's List of Scientific Consultants and have agreed to work with clergy members to answer scientific questions that fall within their areas of expertise. Some of these scientists have been invited to make presentations to congregants in an attempt to break down barriers and to increase understanding.