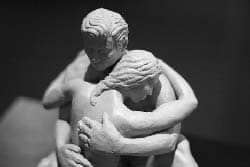 The debate on homosexuality and the Christian Church has raged on for nearly half a century. At this point, the debate has developed to such a point that nearly every argument on all sides of the debate has been heard time and time again. And yet, neither side has been convinced of nearly anything that they didn't already believe upon entering the fray. I oftentimes am struck by how each side of this debate oftentimes speaks not to the person on the other side of the debate, but past him. At least for those on the progressive side of this issue, I feel a better empathy for evangelicals must be attempted.

It is all too easy for progressives and LGBT individuals to simply write off those on the religious right as unwinnable. While this seems to make sense when we think about it in the abstract, my personal experience as a gay person from the South has shown me that some of the people who most readily accept me have been evangelicals or conservatives. I have known I was gay since the very first time that I learned what the concept was. As soon as I hit puberty my realization that I was not attracted to girls like the other boys began to be confirmed for me. Until this date, I have never been sexually aroused over women, so my homosexuality has always seemed to me so central a part of how God made me that it is unfeasible for me to believe it is something that I could ever change.

As I grew older I began to be as certain in my identity as a gay person as I was certain that God was the force that had brought so much good into my life. And so when I was a freshman at Harvard College, in a spirit of love and honesty, I chose to come out to my parents. About two months after that, they expressed an unwillingness to accept me and went so far as to disown me completely. I haven't spoken to them since that time. But out of this horrible ordeal, I have gained a great faith in God and the purposefulness of my life in His eyes. Ironically, it was through my very gayness and the qualities of humility, resilience, and tolerance that it has forced me to develop that I have grown to be a stauncher Christian than I ever was before I fully embraced my identity.

As I began to reach out to other relatives and family friends, I was most struck by the fact that many of those who I most suspected would be most homophobic have actually been the most accepting. Some of the most supportive people for me have been the very same conservatives and evangelical Christians that I had so readily written off before. What began to change their mind on this issue was not some abstract set of arguments, but rather the personal connection and love they had for me. In talking to evangelical Christians about homosexuality and the Bible, the left too often uses academic and theological arguments. Because the faith of an evangelical Christian is so often built on a personal experience with God, these sorts of arguments rarely work.

What is needed is to connect arguments in support of homosexuality to one's own personal relationship to God and how that can be reconciled with support of homosexuality. If more gay people could speak to evangelical Christians in their own language of loving God, then more of them would be forced to confront the hatred they sometimes hold toward gay people. It is also the responsibility of LGBT people and their allies to reconsider their abrupt dismissal of any Christian who doesn't automatically support their issues. The issue of homosexuality threatens for some Christians to completely discredit their understanding of the Bible's validity, and only with true respect for this can progressive Christians ever hope to reach out effectively to conservatives. It is said that the issue of homosexuality has a real possibility of tearing the Church apart, but I believe that with real work at empathy on both sides it has the potential to bring people to a truer understanding of Christianity than ever before.

This article was submitted by a leader in the gay student community at Harvard University.