Gambling with Your Future: Two Religions, One Marriage 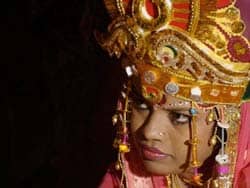 The carload of Hindu women was on a "moon-sighting" expedition in the middle of New York City. Driving up and down skyscraper-walled avenues, they were looking for the moon. It was Karva Chauth. They couldn't break a fast taken for the health of their husbands until they caught a glimpse of the moon. Finally, mission accomplished, they returned to the dinner party they were attending.

One of them was Janet, an American married to a Hindu. Although not Hindu herself, she had learned some Hindi, installed a puja room at home, and given her daughters Hindu names. She had been feeling sick that day and was faint from the fast. She felt angry and imposed upon because her husband Raghu expected her to observe the fast in spite of her ill health. But he considered himself a model husband, and would have been annoyed if she begged not to. After all, wasn't his wife simply doing her duty as a good Hindu wife?

Sharda is a Hindu woman in Kuala Lumpur who fell in love with Hasan, a Muslim. He had insisted that she convert to Islam at the time of marriage and that the children be brought up as Muslims. She gave in, but a few years later there was a major crisis: Hasan took a second wife, allowed under Islamic law. She had no choice but to accept it, because if she divorced him, he would get custody of the children. She has lost her religion and her culture, and even the intrinsic bond of man and wife.

Such are the hurdles, big and small, of an interfaith marriage. These couples have to slay more demons than most, for they have to contend not only with the emotional baggage they bring into the relationship, but also with the demands of different traditions.

Religion is indeed a major stumbling block in intercultural marriages. Which is the correct route to paradise? In the first flush of romance, couples hardly give a thought to religion, but the problems magnify with the birth of children. Which faith should they follow?

Can a person from an alien culture infiltrate the tightly-knit Hindu world and make it home, especially in India? Many have tried. Some have failed, tripped up by caste, religion, and in-laws; others have flourished, turning negatives into positives, enriching both cultures. In any marriage, intercultural or not, it is usually the woman who makes the major adjustments. For a Western woman entering this culture of contrasts and contradictions, it is no easy chore.

Many Western women have come into this bewildering Indian world of large joint families where the patriarch is the head of the extended family, no matter how old his sons. Another surprise is the Hindu mother-in-law, the de-facto commander, many-armed Indian Goddess who giveth and taketh, and to whom all must bow in obeisance. When a woman marries an Indian man, she generally marries his whole family of father, mother, brothers, sisters, sisters-in-law, uncles, aunts, and cousins as well. For the Western spouse expecting more marital sovereignty, the Hindu joint family demands can be very disquieting.

Often intercultural marriages fail, a victim of unrealistic expectations. Some Indian men are brought up with preconceptions and misconceptions of what marriage ought to be, based on self-effacing mothers, sisters, aunts, and sisters-in-law in a male-dominated culture. Living in hectic cities abroad, these men still expect their Western women to transform into traditional Hindu wives.

Indian women married to foreign men, however, seem to do better, perhaps because these women are used to the idea of being the givers, compromisers, and adapters. In a traditional Indian marriage they would be adjusting to a vast family of in-laws, whereas here they adjust to a new culture and people.

Susan is a young American woman married to Anil, a Hindu who lives in New Delhi. When she delivered her first son at her mother's place in California, the child was baptized, in a Christian name-giving rite. But in India this first son had a Hindu name-giving ceremony and was given a Hindu first name and an American middle name. Is he Hindu or Christian? Will his religious education become a matter of dissent? Only time will tell.

Pathmaraja Nagalingam, a businessman in Malaysia, says that there are over 150,000 intercultural couples in that country. Since Malaysia is a Muslim country, in any interfaith marriage, the non-Muslim spouse must convert to Islam. "These interfaith marriages are the main reason we are losing our Hindus," Nagalingam says.

Krishnan, a young Tamil in Kuala Lumpur, was very committed to the Sanatana Dharma. So the priests at the temple were surprised when he told them he was marrying a Catholic girl. He explained she wasn't very religious so there would be no conflicts. In the first years of his marriage, he kept up his religious practices. But gradually he stopped coming to the temple because his wife wanted him home on the weekends. When the children were born, he intended to bring them up as Hindus, but his wife objected so he gave up this idea to keep his wife happy. To this day he silently feels sad and guilty.