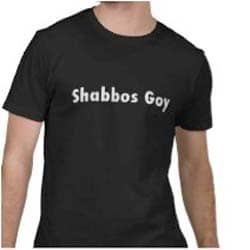 The two parties first faced off during the Rabbinic period (70-500 C.E.) when rabbis argued over the implications of setting up a contraption that would water gardens during Shabbat. In the 19th and 20th centuries, the controversy took new form, when Jews hired "Shabbos goys" to perform tasks that were forbidden on Shabbat. While some rabbis shook their heads in disapproval, others were too busy scouting out goys-for-hire for themselves. They also updated the halakhic rule against igniting a fire on Shabbat to mean completing an electrical circuit. Savvy inventors got cracking on finding ways to maintain religious observance without sacrificing key technological advances.

In 1965, the Shabbat elevator was born. It stopped on every floor, avoiding the necessity of pushing the button. But doubts about the kosherness of the invention persisted, and this past September four prominent Haredi rabbis in Israel issued a ban stating, "It was made clear to us that in using these elevators, either in ascent or descent, direct activation is created regarding doing work according to the Torah." Controversially, the decree left no exceptions for the elderly and the infirm. David Weitz, who has a hospitalized 90-year-old mother, responded by suggesting to The Jewish Week that Rav Elyashiv, one of the co-signers, "should be moved to a 30th floor apartment. After all, he's 98 or so."

Despite the recurrent squabbling, entrepreneurs have created other technologies that have been well-received in religious circles. Five years ago, the wife of a Toronto rabbi was searching for a way to read on Friday nights and asked her husband to call his friend Moshe Orzech, who was in the lighting business. After six months of brainstorming, Orzech and a partner developed the Kosher Lamp, which allows customers to direct light and set brightness by twisting a shade instead of flicking a switch. Orzech founded Kosher Innovations, which now sells a variety of Shabbat-friendly products, including the KosherClock and the Teddy Night Light, on the internet and in Judaica and grocery stores. Other engineers around the globe are following Orzech's lead, modifying even larger and clunkier devices for Shabbat, such as refrigerators and ovens.

One would expect a loyal opposition to any technology that bends religious tradition, however slightly. But the companies have heard little criticism, claims Orzech, explaining that the products follow the rules of halakha and maintain Shabbat's unique harmony. "I wouldn't, for instance, sell a TV with a timer," says Orzech. "That would ruin Shabbat."

Another contender in the science of kosher-for-Shabbat appliances is the nonprofit Star K. In 1997, the organization, whose original goal was to certify foods as kosher, was asked by Whirlpool for advice on preventing oven and stove lights and buzzers from clicking on and off when families were trying to warm their Shabbat meals. Engineers at the organization helped Whirlpool develop what came to be known as "Shabbat mode." They equipped appliances with switches that deactivate lights, beepers, and other electronic bling during Shabbat, and companies like General Electric and KitchenAid followed suit. Some have opted for a switch that deactivates 12-hour oven safety shutoffs -- a feature on standard ovens that shuts down the appliance after it has been in use for twelve consecutive hours. By overriding the shutoff, families can warm their food for the full duration of Shabbat and the range of holidays.

The internet's omnipresence has posed new challenges to Shabbat compliance. In Israel, computer engineer Shay Solomon found an answer with his Saturday Guard, which aims to shut down websites during Shabbat hours. The software tailors itself to customers' varying time zones through their IP addresses. Solomon's most memorable client is Shraga Crombie, the CEO of shop.chabad.info, who contacted him after a Chabad rabbi noticed that many of his customers were purchasing items through the site on Shabbat. After Crombie installed Solomon's software, sales on Shabbat plummeted to zero but overall sales rose steeply. "They felt God was rewarding them for keeping Shabbat so strictly," says Solomon, who has set up a nonprofit to provide the software to religious sites. Solomon claims that his invention has barred 19 million users from logging onto websites during Shabbat and that even the Ashkenazi Chief Rabbi in Israel, Yona Metzger, was impressed, sending him a thank you note.