By Benjamin B. DeVan 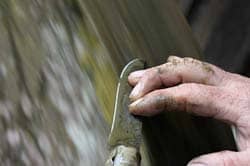 "Why Comparative Theology Today?" Because, to modify Proverbs 27:17, as iron sharpens iron, so does one religious tradition sharpen another. But why is such sharpening valuable? If religion and theology are themselves frivolous, then Comparative Theology is trivial as a bridge, subspecialty, or third discipline employing other religious traditions to refine one's own; or utilizing disparate doctrines to filter gold from theological dross; or for evaluating, incorporating, synthesizing, and organizing insights from multiple religions while attempting to do "justice to the basic commitments of all" (John B. Cobb, Jr.).

As a former religion and humanities university instructor, presently a Harvard Th.M. student, I am regularly adjured by the inquisitive and incredulous as to why anyone, especially students grudgingly registered to meet a curriculum requirement, should study religion or theology at all.

First, I point out that it is impossible to do justice to any major religious tradition simply by taking a course, reading a book, declaring a major, enrolling in seminary, or earning a Ph.D. Any of these may supply fertilizer for lifelong rumination, but numerous volumes are published explicating thousands of theological themes barely mentioned, let alone surveyed, in most college, university, or seminary modules and seminars. Nevertheless, completing an undergraduate class or sifting through theological tomes yields a sampler taste of the greater feast within the study of religion, a banquet enhanced by a useful menu, talented academic chefs, and the desire to cultivate an astute sense of taste.

Second, religion is difficult to define. Wilfred Cantwell Smith doubts "religion" is a valid category for describing non-European beliefs, rituals, and values, since it is a term originating in Europe and applied, Smith avows, haphazardly to non-European cultures and contexts. Feminist Rita Gross is more optimistic about quantifying religion but cautions, "Everyone has an intuitive sense of what is meant by the concept of religion, but these definitions are often limited by ethnocentrism. They often assume... all religions are... like religion in one's own culture."

Religion has been classified as the voice of deepest human experience, behaviors concerned with supernatural beings and forces, the longing for or encounter with the transcendent numinous, a feeling of absolute dependence, a taste for the infinite, and the chief fact regarding a person's practical beliefs about, "vital relations to the mysterious universe, and . . . duty and destiny there" (Thomas Carlyle). The Dalai Lama suggests all the major religions are "dedicated to the achievement of permanent human happiness." Gandhi believed, "In reality, there are as many religions as there are individuals." G.K. Chesterton, later echoed more famously by Paul Tillich, wrote that religion is one's sense of "ultimate reality," of whatever meaning someone finds in his or her own existence, or the existence of anything else.

A concurrent controversy is what counts as religion and what does not. Is Atheism the religious belief that there is no God? What about political philosophies like Communism, where humankind or the state is deemed ultimate? Are sports with fervent rituals, rules, loyalties, and "idols," religions? Comparative Theology clarifies such queries by investigating religion's multivalent manifestations and inspecting the potentially theological nature of ideas and actions that less attentive onlookers or participants casually compartmentalize as secular or irrelevant to religion.

Third, because religion eludes easy definition, its boundaries are notoriously ambiguous and porous, interweaving issues from anthropology, archaeology, the arts, cosmology, ethics, history, literature, philosophy, politics, psychology, sociology, and even theoretical physics. According to Christopher Dawson, "The great religions are the foundations on which the great civilizations rest." Thus, Comparative Theology equips us to appreciate richness in history and culture we might otherwise miss. From the poetry of John Donne to the majesty of the Taj Mahal, to the intricacies of Indian dance:

One cannot study themes of art or forms of architecture without some reference to the impetus provided by religion . . . one cannot learn about music and poetry without somehow noting the influence of religious inspiration. History, sociology, and anthropology cannot be taught or interpreted without consideration of religious customs and practices . . . psychology without reference to religion as a force that motivates, regulates, influences, and even directs . . . behavior . . . is almost impossible. (Dawson)