I Love Science: From Whimsy to Weighty 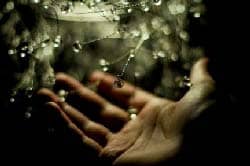 As I was growing up I didn't like science very much. It seemed to me a lot of empty facts, bits of knowledge about the formation of the planets, or atomic valence, or the parasympathetic nervous system -- stuff that I had to memorize but that didn't matter much in my everyday life. I would much rather read a novel by Dostoyevsky or a philosophical essay by Camus, something that spoke directly of the joys and sorrows of life. I only began to be interested in science when I realized that it was, in fact, all about me. The law of gravity tries to explain what holds me on this planet; photosynthesis is the process that grows the fuel that powers my life: the complex web of neurons in the brain is what create my experience. (I also think my interest in science coincided with the beginnings of my meditation practice.)

Now I keep a file in my computer just for science information, and almost every day I make another entry, often returning later to speculate on what it means. I'm especially drawn to the scientific discoveries that point to annica, dukkha, or anatta, (impermanence, unsatisfying, non-self) -- the Buddha's three characteristics of existence. Occasionally I will read about some research, or even find a single fact that sends me into an altered state, a revelation of non-duality, a feeling of self-liberation. Some science information I just find whimsical or funny.

Here are a few entries from my science notebook, accompanied by my comments and musings. My extrapolations are often questionable, but all of the basic information is science, so it must be true.

I recently read that there are 100 sextillion stars in the universe. Sure. I'll go along with that. Some astronomers must have counted them. Meanwhile, an astrophysicist claims to have figured out the size of the universe -- it's 10 billion, trillion, trillion cubic light years large. All right, approximately. And remember, this was as of May 2007.

Modern science keeps presenting us with these enormous numbers, but most of them are meaningless in the sense of being incomprehensible to our tiny little brains and even tinier perspectives. I've now got so many of these gigantic numbers in my head that I get confused when I'm not near my notes, about whether there are an estimated 50 or 100 billion galaxies, and whether there are 50 or 100 trillion cells, and sometimes I confuse the two categories. Maybe we will discover that there are exactly as many galaxies in the universe as there are cells in our bodies, and that will either be a strange coincidence, or a hint that reality isn't just random chaos bumping into itself.

As science presents us with all of these big numbers, it's becoming more and more convenient to be a mystic, and just see it all as "one." Of course, the essential question remains, "Who's counting?"

A few important facts to know about laughter. Research shows that when you have a belly laugh, you breathe in six times more oxygen than normal. Some experts estimate that twenty seconds of laughter is equal to twenty minutes of cardio-vascular exercise. Usually something is funny as well, which is its own reward. In fact, laughter stimulates euphoria centers in the brain, the same ones that light up over chocolate or sex.

Actual scientific studies have been done on "the vocalization and burst rates" of laughter, finding that across cultures, the most constant consonant of laughter is "h." Most of us go "ha ha," or "hee hee," "ho ho," or "heh heh." The researchers also found that nobody laughs with mixed consonants, as in "ha, fa, la, ca, kee, po...."

Anthropologists now believe that the human "ha-ha" evolved from the rhythmic sound made by other primate species when tickling and chasing each other in play. They make a sound like "hooh hooh."

Primates like to tickle each other, and one scientist has determined that the first joke ever made was the fake tickle, when the gesture to tickle is made but withdrawn before contact. "Ha ha. Fooled you."

More numbers. Every cell in your body goes through 4,000 transactions a second -- processing fuels, exchanging chemical and electrical signals with other cells, monitoring the environment, creating proteins and enzymes. Considering that you have approximately 50 trillion cells in your body, there are literally quadrillions of events taking place inside of you every single second. Stay mindful!

I love the new neuroscience, especially when it confirms my meditation experience.  But sometimes I sense that the science information is bringing a bias into my practice. For instance, ever since I heard that greater activity in the left frontal cortex of the brain correlates with more contentment, I've been sort of "leaning" that way in meditation, exploring that area of my head with my attention. When I first started to meditate I would often focus on the pressure around my "third eye," until my teacher Goenka told me to stop because it would lead to the yogic powers known as "siddhis," and then I'd be seduced from the pure path of the Buddha.