Meditation on the Trinity 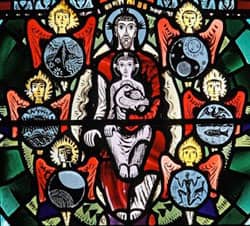 I wonder if, on Trinity Sunday (the Sunday after Pentecost), many people feel like the sermon is answering a question they aren't asking. (What does the Trinity have to do with my daily life?) And many preachers may think to themselves, "Here is another occasion when my job is to try to convince people that an abstract concept they never give much thought to is foundational to their lives."

In his book Christ Plays in Ten Thousand Places: A Conversation in Spiritual Theology, Eugene Peterson writes that the Trinity is "the centerpiece of Christian theology and sometimes considered the most subtle and abstruse of all doctrines" (45).

It's the subtle and abstruse part that is the problem. All that detail about homoousious and hypostases and who proceeded from whom. The preacher can take a couple of different tacks. She can exhaustively explain the history and nuances of the doctrine of the Trinity, going into details about person and substance and procession until listeners are blurry eyed and eager for escape. Or she can opt for the overly simplistic approach and say, "It's a mystery. Just remember the number three. That's all you really need to know for the test."

Another way of asking this is to say: What kind of life does the Trinity shape? To jumpstart some homiletical reflection, I'm going to start with one theologian's response to that question. I'll follow that with what I call a "theological tune-up," on the Trinity, a reminder of some details we once knew and probably still sort of remember. I'll follow that with a few reflections on how the lectionary texts for Trinity Sunday connect with these themes.

What kind of life does the Trinity shape?

Personal and Participatory
Peterson reminds us that "our Greek theological ancestors used the term perichoresis to describe the Trinity" (45). Perichoresis is the Greek word for dance, (peri = around; choresis = dance). Peterson asks us to imagine a folk dance with three partners in each set. The music starts up and the partners holding hands begin moving in a circle. On a signal from the caller, they release hands, change partners, and weave in and out, swinging first one and then another. The tempo increases, the partners move more swiftly with and between and among one another, swinging and twirling, embracing and releasing, holding on and letting go. There is no confusion, every movement is cleanly coordinated in precise rhythms as each person maintains his or her own identity. To the onlooker the movements are so swift it is impossible at times to distinguish one person from another; the steps are so intricate that it is difficult to anticipate the actual configurations as they appear.

Peterson concludes that this metaphor for the Trinity, a subtle and abstruse doctrine, can be observed by anyone in an American neighborhood barn dance or an Irish ceilidh.

We are baptized in the name of the Trinity. Our Christian lives are an immersion in the triune God, God the Father, God the Son, and God the Holy Spirit. We are shaped by this triune life. We are now participants in the company of the God who creates heaven and earth, who enters history and establishes salvation as its definitive action and who forms a community to worship and give witness to his words and work (303).

A personal response to a personal God: "God is nothing if not personal" (45) and can only be known by personal response. We cannot know God through impersonal abstractions or in solitary isolation (46). "The only way God reveals himself is personally. Never impersonally as a force or an influence, never abstractly as an idea or truth or principle" (304).