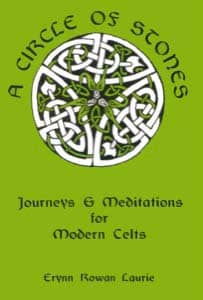 I first encountered your writing through A Circle of Stones: Journeys and Meditations for Modern Celts over ten years ago. It had a huge impact on my personal practice. What was the inspiration for the book? Why use meditation beads?

My inspiration for the beads was really from some local Brit Trad friends of mine who were working with beads in that way, built around their own tradition. It seemed to me that this would be a fairly easy way to introduce some of the cosmological concepts that I'd been finding into a personal practice, immersing the user in a way of thinking, particularly because almost everything I was using for the meditations themselves was from traditional Irish or Scottish Gaelic language sources. I would do it very differently now than I did then, because I've learned so much in all those years, but I'm always surprised and heartened to hear that people continue to find that work valuable or inspirational, so thank you for that.

Beads are a pretty easy and concrete way to have a personal practice. The idea of having this little ritual you can perform whenever you need a connection to your sacred cosmology or your deities, rather than needing something elaborate like a feast for the ancestors or passing between two bonfires for blessings is appealing to a lot of folks, I think. It can be a solitary pursuit, so it doesn't depend on finding other people to help you carry it off in the same way you need three or four or a dozen people and a large room or an outdoor space to do a more complex ritual. It's really just a ritual you can put in your pocket and take with you anywhere. It's a reminder of our place in the greater pattern of things.

You've also written a book on ogam, the Irish Gaelic alphabet. I understand you work with ogam differently from other authors on the subject. How is your book, Ogam: Weaving Word Wisdom, different from other books on the subject, and why is that difference important?

Most of the books on ogam that have been available in the Pagan community have come at the system from a tradition that identifies each letter with a tree. They tend not to go any farther than that, even though there's this immense, rich tapestry of material available on the topic. A lot of the material that most -- but not all -- of these books rely on for their source meaning is the reading that Robert Graves proposed in his The White Goddess, which is really a deeply flawed work that has more to do with Graves's imagination than with Celtic spirituality or the ogam alphabet and its origins.

The tree ogam is certainly a valid way of coming at the system, but I was never really quite able to fall into that as a meaningful symbol set for myself, and I saw contradictions in some of the Pagan resources I was reading, so I looked into it more deeply, going as far as taking a university class in Old Irish language to help my understanding. What I found was quite surprising, in that the meanings of the names of the ogam weren't, as I had always been told, all trees. They were really conceptually much more like the Norse runes, where the names translated to objects or concepts, only some of which were trees. Once I found that out, suddenly ogam became a much more useful and accessible system to me. I was able to actually touch it and turn it around in my mind as a workable system for both magic and divination.

There are literally dozens of different ogam lists that people could work within the source material, and limiting one's understanding to just trees robs the system of much of its beauty and depth, in my opinion. My book opens out the system to let people explore the other aspects of ogam, beyond the trees and their mythic and folkloric associations. It also helps people get an understanding of filidecht, or the craft of sacred poetry, in the Irish tradition, because the ogam material is embedded in the poet's craft as metaphor and allusion. I also point out that the ogam didn't have a druidic origin, which is a deeply-held myth in the Pagan community; its origin is several centuries after Christianity arrived in Ireland, and was a part of the monastic literary tradition, but this doesn't mean we can't use it in ways that are meaningful to us as Pagans. To call ogam a druidic alphabet is misleading if one is referring to its history rather than its use by some contemporary druids.