Postcard from Patmos: Musings of a Meandering Pilgrim 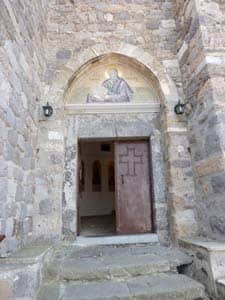 Now I saw a new heaven and a new earth, for the first heaven and the first earth had passed away . . . And God will wipe away every tear from their eyes; there shall be no more death, nor sorrow, nor crying. There shall be no more pain, for the former things have passed away . . . Then He who sat on the throne said, "Behold, I make all things new . . . I am the Alpha and the Omega, the Beginning and the End. I will give the fountain of the water of life freely to him who thirsts . . ." There shall be no night there: They need no lamp nor light of the sun, for the Lord God gives them light. And they shall reign forever and ever . . . Amen! Even so, come, Lord Jesus! ~ fromThe Revelation of St. John the Divine, 21-22, NKJV

Here, on his island of exile,
the winds still blow wild
as if to remind us:
John graced this land
with his ancient body,
with his shining mind,
and his spirit was set free,
unshackled by the iron chains


that bound his hands and feet
as he sailed a prisoner
from Ephesus to Patmos
by Diocletian's decree.

Abandoned and deserted
on this remote, barren isle,
an old man of over ninety years
with only his young amanuensis
and the fussing crows to visit
his dark cave for company.
The year or so he lived here,
Beloved Disciple turned hermit,
John received the Revelation,
preached the Gospel of Love,
and baptized new Christians
in the azure Aegean Sea.

God met the apostle here --
not where he had planned,
not how he had planned,
but in the perfect timing
and mystery of the Holy, Who
revealed an end-time vision
filling his small cave with blazing
Shekinah glory, when Saint John
was in the Spirit on the Lord's day,
unveiling signs and great wonders
as Uncreated Light illumined this
pilgrim's humbled, emptied being.

Far away from his congregations,
Christ's brother came to know
the height, width, and depth
of Love in a dream about the Lamb
told by an angel holding seven stars --
of plagues, dragons, numbers, seals,
of precious jewels, gold-paved streets,
and a flowing river of the water of life --
as the very stones began to rumble
over, around, and beneath him there,
revealing things beyond this earth
and the Eagle Man's imagination.

Throughout this long pilgrimage, I've continued to learn that the plans I make for myself, the lists of "important things I have to do," and the ideas that come in the middle of the night for ways I can render everything in my life more pleasant or "perfect," are not as important as they used to be. So when we chose to continue our pilgrimage on Patmos, the island of exile for the apostle John, the author of Revelation, I was very curious to know what God had in store for me here.

For several years, we had planned to tour several Greek islands in celebration of our fortieth anniversary. My knee problem put a stop to that. But it also helped me to learn -- for about the hundredth time -- that my acceptance of God's leading through prayerful discernment will bring amazing things into my life if I remain open to the Holy Spirit and allow God to direct my path.

By spending almost two and a half weeks on this tiny island, I came upon a new kind of awareness of holiness and place, an island full of light and fragrance and the joy of the Spirit. I came to Patmos for its simplicity and quiet, but I could not help but encounter the spirituality of the land and the people who live there. I also gained insight into the spirit of the Beloved Disciple, John Theologos, as he is called on Patmos, the apostle who hears and speaks the word of God. For the first time in my reading of his book of Revelation, I believe that I now understand on a deeper level the intention of the holy vision of the end times shared in this enigmatic last book of our New Testament(though by no means do I pretend to understand the vision related therein!).

Only 34 square kilometers and volcanic in origin, Patmos is the northernmost island in the chain of Greek islands known as the Dodecanese. St. John's small cave sits just back from the tightest bend on the road from the harbor town of Skala and the hilltop village of Hora. Up above the cave in Hora is a large monastery named in his honor.