The Quran and All Truth: Islam and Cosmology 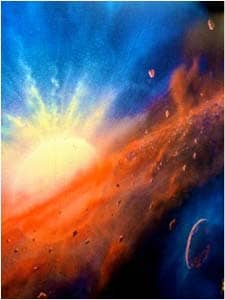 In its broad sense the term "universe" refers to the totality of existing entities and processes. This term includes reference to all modes of natural existence, various sciences such as astronomy, physics, biology, chemistry, and psychology and contributes to man's understanding of what is contained in all this comprehensive subject matter. In a restricted sense, the term "universe" refers to what is taken to be the most inclusive system of astronomical bodies. Now scientific cosmology is taken in the sense of astronomy. The universe in scientific cosmology is identified on an observational level with the vast realm of galaxies.

Cosmology is as old as human beings. Men have been examining and wondering about the sky for many millennia; the beauty of the night sky has been a source of fascination and pleasure for all mankind. Men and women have watched and wondered at the seasonal procession of stars across the heavens. Thus astronomy was the first science of ancient civilization, the avocation of Egyptian priests and Greek philosophers, medieval monks and Renaissance princes. As scientific discoveries have been made, ideas about the origin of the universe have changed and are still changing.

Modern astronomy deals with the birth and death of stars, with exotic matters and energies, with infinities of space and time and with creation, evolution, and the ultimate destiny of the universe.

Science has revealed a universe of unimaginable size; billions upon billions of stars burn with the energy of the thermonuclear furnace. Many die in explosions that litter the reaches of space with gas and dust. While thinking about the universe, man tried to find his place in the universe. Where is earth located? Through his observation and knowledge he tried to unfold the mysteries of the universe. As long ago as 1100 B.C., Mesopotamian and Babylonian cultures mapped the motion of the planets across the sky by observing how they moved against the background of the stars.

Aristotle in about 350 B.C. theorized that the sun, the moon, and the planets all revolved around the earth. In about 250 B.C., Greek astronomer Aristarchus of Samos became the first person to assert that the earth moved around the sun. But Aristotle's model of the universe prevailed for almost 1800 years. Until the 16th century, people considered the earth to be the centre of the universe.

In about 140 A.D., Egyptian scientist Ptolemy explained the retrograde motion as a result of set of small circles called epicycles on which the planets moved. His ideas were accepted in an age when standards of scientific accuracy and proof had not been developed. Even when Polish astronomer Nicolas Copernicus developed his model of sun-centered universe in the 1540s, he based his idea on philosophy instead of observations.

In the 16th century, Danish astronomer Tycho Brahe made most scientific and accurate observations of the universe to that time. After him, German astronomer Kepler discovered that planets orbited around the sun in elongated circles. This discovery was Kepler's first law and then he developed two more laws about how speed and periods of the planets changed.

Later on, Galileo, the Italian scientist, Newton, the English scientist, and Einstein, a German turned American scientist, gave new dimensions to astronomical developments. In this way, Kepler's laws of orbital motion, Newton's laws of motion, and Einstein's general theory of relativity went a long way to contribute to man's understanding of the universe and unfold many mysteries of the universe. Most of cosmology today is based on the set of solutions found in the 1920s by Russian mathematician Alexander Friedmann.

Modern astronomers base their theories on astronomical observations, physical concepts such as quantum mechanics, and elements of imagination and philosophy. Cosmologists have moved beyond trying to find earth's place in the universe to explain the origin, nature, and fate of the universe.