Shades of Blue: Musings of a Meandering Pilgrim 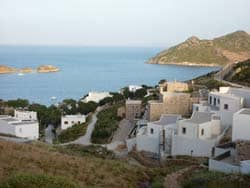 How many shades of blue are there?

I began to explore this question as the morning light woke us on our first day on Patmos. Down the slopes of daisies and red-orange poppies and whitewashed houses stretches the sunlit Aegean, with its pebble beaches and undulating shoreline. Behind us stood sharply pointed hills, where goats climbed paths ringing their bells and you could often find small caves made into hermitages. The homes of the Patmians, white or natural stone, are usually trimmed in one shade of blue or another, the blue of the flag of Greece, the blue of the sky, and most of all the many blues of the sea.

Because of the difficulties with my knee, we had chosen to make Patmos our main destination in Greece, and would be staying over two weeks here. Very few accommodations were open and available since the summer season begins in early May, but we were able to locate a charming natural stone house built by Matheos Theologos and run by him and his wife, Elisa. Somehow, we thought the name for our home away from home was appropriate: Theologos Houses! From our terrace we looked down the slopes at the sunlight playing on the water.

From Athens to the north, the ferry arrives in Patmos, a small Greek island near the coast of Turkey, after 2 a.m., and the little harbor town of Skala is still wide awake.  As the ferry backed against the wharf, I looked up across Skala to the hills behind, where I saw what looked like a huge castle at the top of a very high mountain, with lights glowing all around it. This unusual site led one writer to call Patmos "the island with a halo." The halo that crowns the island is created by the lights from the village of Hora that surround the Monastery of St. John. Following a Greek Orthodox priest who was hand-carrying a large carved silver incense holder, we got off the ferry, found our bags and trudged off the ferry ramp to the wharf, looking for our host, Matheos, whose bright smile and reassuring greeting was almost like another halo. Since there are only 3000 people who live on Patmos year round, we were looking forward to some peace and quiet with time to explore the island where John wrote the book of Revelation during his exile. Fortunately, that's what we found in our temporary home looking down on the Grikos harbor and to the islands beyond. (You can see our view and where we sat every day in this picture here).

Each morning, we would awake and have our coffee on our patio looking down on the village and bay below. We could see the tortoise in our neighbor's yard, the calico cats chasing birds and each other, children swimming on the beach, scooters being driven on the narrow roads, and boats pulling in and out of the harbor. In the evening we could hear music as it floated up from one of the two tavernas along the shore, and we could smell the lovely fragrance of wild oregano and the eucalyptus trees.

Our daily routine was designed to allow me to rest and ice my knee as much as possible, so we would visit a site in the morning and come back for lunch. Ron would then go out to walk in the hills while I rested, read, and elevated the knee in the afternoon. Dinner was usually out at a taverna somewhere around the island.  One of our favorites was high up in Hora, close to the halo and near St. John's Monastery. From the terrace, we could see the town of Skala and most of Patmos as well as many other islands in the distance. Another favorite was on a hill above a quiet beach called Lampi, where we could see the two windmills as well as look down on one of the most stunning stretches of beach we had ever seen. This is a beach where they actually ask you not to take the shiny stones, which are unusually beautiful, because so many people have in the past. I call it the Beach of the Singing Stones because when the waves roll the stones together, the sound is so musical that it actually sounds like they are "singing."

Our time on Patmos included the Orthodox Feast Day of St. George. We learned that many of the local people would be going to church in the morning, and so we decided to attend the Orthodox services at a church high up in the Hora. The streets of Hora are more like paths, with houses sometimes less than three or four feet apart. We drove as far as we could, but for the last several hundred steps, I had to use my crutch to negotiate the narrow street between the houses perched high up on the hillside. We sat outside because the church was packed with people, including village children of all ages dressed in their Sunday finest. We could hear the chants and prayers of the liturgy and even smell the fragrant incense used and the bells being rung.