The World Will Be Different

Obviously, there are political obstacles that would have to be overcome before threats of this kind could be put into effect. But if the Hastings case were decided in favor of Hastings, there would only be political obstacles and not Constitutional ones. All of these conflicts would become political battles for the legislatures, rather than having Constitutional protections that guarantee freedom of religion from the outset. That would open up any number of nasty battles that the First Amendment was intended to foreclose.

What exactly were the grounds on which Hastings refused to recognize CLS?

There are over sixty registered student groups on the Hastings campus, and when the Christian Legal Society applied to be one of them, it was told that Hastings could not grant them the same status as other groups because their insistence that their officers and those who vote for their officers subscribe to a statement of Christian beliefs amounted to discrimination on the basis of religion and sexual orientation.

The litigation history is complicated because Hastings shifted its rationale for disapproving CLS in the midst of the litigation. When CLS was denied, they were told it was pursuant to a written non-discrimination policy, and they had discriminated on the basis of religion and sexual orientation. Yet once the litigation started, about a month into the discovery process, Hastings shifted and said their policy is actually that all student groups have to be fully open, including their leadership and voting membership, to all students. Later this "all-comers" policy was refined yet again to the claim that you cannot discriminate on the basis of status or beliefs, which means that groups are specifically not allowed to confine their membership to people who believe in the fundamental purposes of the organization.

This is a very strange policy. So far as we can tell, it has not been adopted by any other public university or public law school in the country. It's by no means clear that Hastings even applies it at Hastings. There are something like eight student organizations who were allowed to register in the same year as CLS whose bylaws are in violation of an all-comers policy, yet it was never suggested that any of them were in violation.

When we point this out in our brief, Hastings' response is "Yes, but CLS is the only one whose bylaws violate one of the specific non-discrimination categories." Which of course is our point: it has never been about an all-comers policy, which is a late and for-litigation-only concoction of the law school. It has always been about discrimination on the basis of religion or orientation. 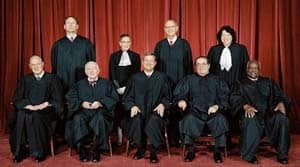 After the oral arguments were concluded, reports stated that the Supreme Court justices seemed confused over exactly the policy at issue. Was this a result of Hastings' shifting rationale?

That's right. The court would like to have a clearer case to decide. Legally speaking, our view is that it doesn't really matter, since both policies are unconstitutional, though for different reasons.

Are they redesigning their case in order to become a landmark case with a broader application, or in order to stand on more solid ground legally?

We don't know. The evidence in the case is closed as of 2004--2005. So we don't know what they have done since they announced this policy. Although, I can tell you that if you go to the Hastings website and click on student organizations, and click on the bylaws of the student organizations, you'll find at least four that still violate the all-comers policy. Yet that's not something the Supreme Court can look at.

Dean Martinez makes some pretty remarkable statements about the all-comers policy in a PBS report that was broadcast the day before oral argument before the Supreme Court. He says that racist skinheads could sit in on the NAACP chapter, and so on. I recommend you look at it, because people think I must be exaggerating when I spell out the implications of the Hastings policy. This is not an exaggeration; it comes right out of their mouths.

[Editor's Note: The link below is the PBS report, and the comments to which Mr. McConnell refers begin at 4:58.]