All of Life Is Religious: Samskaras and Hindu Family Life 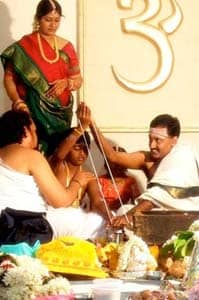 The most fundamental of all rituals in Hinduism is sacrifice. Sacrifice was the primary religious activity of the Vedic period, and although the concept of sacrifice has undergone dramatic transformation as Hinduism has developed over the past few thousand years, it remains the bedrock of the tradition, and Vedic sacrifices continue to be performed throughout the Hindu world.

Vedic sacrifice is a highly structured affair. Strict rules govern the purifying preparations for the Brahmin priests, construction of the altar, the preparation of the offering -- in the contemporary world, various vegetable and grain offerings, particularly ghee (clarified butter) -- and the performance of the ritual itself. All of this is to satisfy the gods and thereby maintain order, or dharma.

The ascetic challenge to the Vedas, as embodied in the Upanishads, on one level rejected ritual action as not conducive to ultimate salvation. On another level, however, the Upanishadic renouncers took the basic ideology of the sacrifice and internalized it, taking the transformative heat of the fire sacrifice and turning it into the purifying heat of asceticism. And although the Upanishads openly rejected ritual, even the act of becoming a renouncer is itself a significant ritual. When one becomes a renouncer, one essentially performs one's own funeral:  the sacred thread is cut, one's normal clothes are exchanged for the ascetic's minimal garb, the hair is shaved, and all of these objects, representing the trappings of worldly life, are burned. This is a symbolic cremation. The ascetic, through this ritual, is now understood to be dead to the world, and when he or she physically dies, no cremation is performed.

Many Hindu rites and ceremonies take place in a temple setting and are directed toward a god or goddess, but by no means do all such rituals take place in the temple; indeed, many Hindu rituals are distinctly domestic affairs, taking place in individual homes.  And certainly not all rites and ceremonies are directed toward the gods and goddesses. Virtually every aspect of Hindu life, in fact, is marked by ritual actions.

Death is a critical moment in the life of a Hindu, not only because it marks the end of life, but also because it marks the transition to the next life. The shraddha, funeral rites, therefore, are among the most important rituals in Hinduism. Such rituals are called samskaras, rites of passage. It is utterly important that the rituals associated with death -- not only the cremation itself but also the preparation of the corpse and the purification of the surviving family -- be performed properly, because if they are not, the deceased may become "stuck" between this life and the next, and remain in the world as a preta, a ghost, to haunt the surviving relatives.

One of the most important rituals associated with death is the pinda pradana, a ritual that is performed at several precise points after death and that involves the offering of small rice balls (pinda), which are thought to feed the deceased prior to his or her rebirth. Additionally, often the family will journey to a tirtha, a "crossing" of a sacred river, at set points after the death and "sink" a portion of the deceased cremated remains, further insuring a safe passage to the next life.

The actual number of samskaras varies considerably, but by any count there are dozens. These include death, as well as birth, naming, the taking of the sacred thread (for the top three castes), marriage, etc. The taking of the sacred thread, or upanayana ritual, is a particularly important samskara, because it marks the point at which a person becomes a full and responsible participant in Hindu life, a dvija or "twice born." Only the top three castes -- Brahmin, Kshatriya and Vaishya -- perform this samskara. (In this sense, the caste system thus confines the lowest caste, the Shudras -- as well as the outcastes -- to a kind of non-Hindu status.) In significant ways, the upanayana ceremony is similar to the bar or bat mitzvah rites in Judaism, or first communion, in Catholicism. Typically the young Hindu -- almost always only a male -- goes through a series of symbolically charged ritual acts in order to become a brahmacari (brahmacaryan), the first of the Hindu ashramas: his hair is shaved (symbolizing his purity); he is given a staff (symbolizing his ascetic journey for knowledge); various mantras are chanted; and his sacred thread is put on.

About Jacob Kinnard
Jacob N. Kinnard is an expert in Indian Buddhism and in the comparative study of religion. He is Associate Professor of Comparative Religious Thought at the Illiff School of Theology. He teaches and lectures on a wide range of topics.