Animal Sacrifice and Sexuality in Santeria 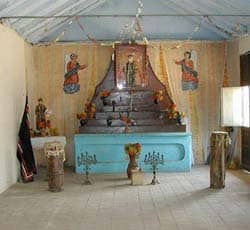 A recent federal court ruling cast an unusually sympathetic gaze on Santería, a family of Afro-Caribbean cultural and religious practices that most Americans learn about (or imagine they learn about) through its depiction in unsettling plotlines on crime shows like "Law & Order" and "CSI: Miami."

But in José Merced v. City of Euless, the Court of Appeals for the Fifth Circuit ruled that Merced, a Santería priest in the Dallas-Fort Worth area, was acting within his Constitutional rights when he sacrificed goats and other animals as part of the ritual home-practice that accompanied him from Puerto Rico.

In fact, the court suggested that such Constitutional protections are especially important for "non-traditional" religions like Merced's.

"There are more than 250,000 practitioners of Santería in the world," the ruling states, "but only two Santeria temples, neither of which is in the continental United States. Thus, home sacrifice is not only the norm, but a crucial aspect of Santería, without which Santería would effectively cease to exist."

What else should we understand about Santería? An interview with Salvador Vidal-Ortiz, a sociologist at American University who has studied the roles of gender and sexuality in Santería practices, reveals a tradition "deeply interwoven with discourses of freedom and liberation."

The first drumming event I attended was in 2000. Since then, I've attended events where practitioners were being initiated, and annual celebrations of religious birthdays for longtime members. These events have generally taken place in private homes in the Bronx, Brooklyn, and Manhattan, usually in basements prepared as religious sites for ceremony.

What attracted you to the tradition? Did you consider following the practices back to their Caribbean or African roots?

My research focus was here, in the U.S. -- not elsewhere -- because learning how these practices traveled was as important to me as the practice itself. Unlike Santería practice in other regions of the Western Hemisphere, practice in the U.S. includes people from many ethnic and racial groups. In fact, there are groups here, like Puerto Ricans, who take up forms of the practice more often associated with other groups, like Cubans.

Over the course of my work, I've redefined Santería as a religious-cultural practice, and not simply a religion, because of the links between diasporic aspects of African culture (Yoruba traditions in the case of Cuba, and overlapping or altogether different influences in the case of Brazil and other Latin American countries) as well as its syncretism with Catholic influences. I'm also interested in where and why the practice is either hidden or open. For example, even though it was ostracized at its inception when it was practiced by slaves centuries ago, Santería practice is not hidden in contemporary Cuba.

Have you chosen to engage in the practice yourself?

I am quite honest about the scope of my work in terms of "how far I would go" within Santería. I chose not to engage in ritual because I am not a Santero (a practitioner -- most people use Santero [m.] or Santera [f.] to refer to initiated practitioners), but there is much more to the practice than its rituals.

What aspect of the practice beyond its rituals has most sustained your interest?

While most people might choose to study a movement like Santería because of their desire to learn about religious practice, I was initially intrigued by the space that I noticed was given to gay and lesbian practitioners. Even though Santería might be perceived as a haven for gays and lesbians in cultures that often provide few other spaces for them -- and there are a large number of gay and lesbian practitioners in Santería -- the practice itself is deeply interwoven with discourses of freedom and liberation, and power and oppression. This is why the main focus of my work now includes gays and lesbians and women of all sexual orientations.