Autonomy and Diversity:
The Contradictions of Wiccan Fundamentalism 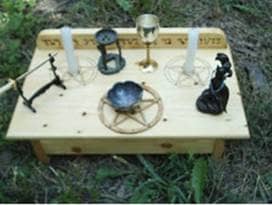 Religious fundamentalism is characterized by literal belief in specific spiritual claims, often about a particular religion's history, regardless of any available evidence. A particular dogma is promoted as the One True and Only Way and anything that deviates is considered heretical.

The Roman Catholic Church has an office within its organization called the Sacred Congregation for the Propagation of the Faith. In previous times this office had another name: the Holy Office of the Inquisition. Despite the name change the office's role has remained the same. It is responsible for keeping doctrinal discipline and confronting and eliminating deviations in doctrinal thought. It's all about maintaining the authority of the Vatican and the pope and ensuring that all Roman Catholics are following the same religion and respecting the established hierarchy.

Wicca is a religion based on autonomy. It draws its basis from Pagan religions of the past but primarily from lore about witches and witchcraft. Most today consider Wicca to trace back directly or indirectly to a single man, Gerald Gardner, who promoted the religion starting in the 1940s or early 1950s in Britain. Gardner described Wicca as based on covens with each coven being autonomous. If there was dissent within a coven the rules as Gardner presented them allowed for the dissenting parties to separate and form new covens. This way of dealing with conflict resulted in encouraging diversity within Wicca and reinforced the idea that there was no central authority that would dictate that one coven was wrong and another right on matters of philosophy or practice.

Gardner also insisted that there were other Wiccans out there that he did not know about who had been practicing before he was initiated. He did this partially to promote the debatable claim that he was merely passing on an intact ancient religion. One consequence of this is that it left the door open for others to come forward and claim they were witches or Wiccans too from a common mythical ancestry and Gardner could not really insist they were wrong. Even if these other Wiccans practiced things differently, Gardner's "old laws" clearly made it acceptable for variety in the way covens and practitioners did things. He might not have intended to do so, but Gardner's decisions regarding how to handle things in his own group had set the stage for Wicca to become much more than just his own teachings in his own groups.

The result of all this was that Gardner essentially gave away the right to exclusive ownership over the label Wicca for his groups and those directly descended from them. He might not have anticipated this possibility but in any case it is what happened. Many groups, sometimes with conflicting philosophies and ways of doing things, have come forward under the banner of Wicca. New groups have been created and old ones have splintered into other quite distinct groups. Autonomy was there, so of course it was exercised!

Not everyone has been happy about this. Some of Gardner's direct spiritual descendants have argued that only they and a few select groups that they approve of should have the right to call themselves Wiccan. However the autonomous structure had already been set up and no single group has the authority to dictate to the rest of the community. Wicca did not have a central authority structure in the past and it does not have one now. It is highly unlikely at this point that a central authority could be established that the majority of Wiccans would respect.

There have been attempts to seize power and establish a central Wiccan authority but these have all failed. One example is when Alex Sanders proclaimed himself the King of the Witches but it was quickly pointed out, particularly by Gardnerian Wiccans, that he did not have any authority outside of Alexandrian Wiccan covens. Another example is when, in 1974 at the Witchmeet gathering in Minnesota, Lady Sheba (a.k.a. Jessie Wicker Bell) declared herself the leader of American witches and demanded that everyone hand over their Books of Shadows to her so that she could combine their contents and then establish a single authoritative Book of Shadows that all American witches would be expected to follow. She was laughed at and, needless to say, was not successful in establishing the central authority she sought.

It was at that same 1974 Witchmeet where we had probably the closest thing to a central Wiccan authority created in the declaration of the Principles of Wiccan Belief. This set of thirteen principles attempted to outline in a very general way the basic foundation of Wiccan philosophy. The concept of autonomy of both groups and individuals is clear in the document. It also specified that lineage or membership in specific groups was not a requirement in order to be Wiccan. Many Wiccans, both as groups and individually, consider the Principles to be the foundation of their spiritual path. However, true to the autonomy inherent in Wicca, there are some Wiccans who do not consider the Principles to be part of their individual or group philosophy.