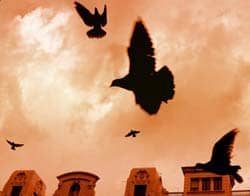 Leaving the Saints: How I Lost the Mormons and Found My Faith.
By Martha Beck. Three Rivers, 320 pp., paperback.

My Fundamentalist Education: A Memoir of a Divine Girlhood.
By Christine Rosen. Public Affairs, 240 pp.

The Truth Book: Escaping a Childhood of Abuse Among Jehovah's Witnesses.
By Joy Castro. Arcade, 230 pp.

When Jon Sweeney was a little boy, he knelt in his living room and asked Jesus into his heart. For his parents, his extended family, and his community, that act was meant to define and direct the rest of his life. In his memoir, Born Again and Again: Surprising Gifts of a Fundamentalist Childhood, Sweeney describes the many ways that fundamentalism has defined him even as he has sought his way out of it. He remembers fundamentalism almost sweetly, sometimes with nostalgia and sometimes with humor, though he also casts a critical eye on its failings, which forced him from its fold.

Several recent memoirs tell about leaving a fundamentalist faith. Each writer remembers a time when the world appeared, at least on its surface, to make perfect sense, a time when each embraced religious certainty without question, and a time when that world began to break apart.

The writers of these four books emerged from faiths that were largely formed in 19th-century North America -- Christian fundamentalism, Mormonism, and the Jehovah's Witnesses. The faiths are distinct culturally and doctrinally -- so distinct that adherents of each faith are quite sure that adherents of the others are going to hell (or technically, for Mormons, to the "telestial" kingdom). Each faith requires missionary efforts to convert followers of other faiths. If Jon Sweeney, Martha Beck, Christine Rosen, and Joy Castro had gotten together for a conversation early in their lives, they might have thought it their duty to inform each other of the consequences of their beliefs. Oddly enough, this is what binds these homegrown American religions together: certainty and fear of not following the rules.

To find a way out of fundamentalism, each writer had to contend with the consequences of breaking the community's rules. Exile, confusion, and a gradual, painful articulation of their own stories in the face of accepted religious truth were the results of their struggle with fundamentalism.

In Born Again and Again, Sweeney places himself in a long tradition of fundamentalist preachers. He was raised in Wheaton, Illinois, and both of his grandfathers were independent Baptist preachers. His family's expectation was that he too would be a great leader -- perhaps a preacher or a missionary. Sweeney remembers his passionate early embrace of this idea and his desire to fulfill his family's expectations.

The love, pride, and unadulterated certainty of his family bound him to his fundamentalist faith in a way that perhaps was unique among the experiences of these four writers. He describes his tiny grandmother giving him a hug and telling him, "God loves you and so do I!" She squeezed him so hard that it was as if she wanted to physically press the love of God into him so he would never forget it. He writes that the "sensuous aspects of his faith" -- the familiar fundamentalist hymns, the voices of small-town preachers crackling through his AM radio, the "thunderous, rhythmic word pounding the Spirit of God" -- bound him, far more than dogma did, "like a slip knot, loosely but decisively to my religious place."

Although Sweeney is unique in describing the tactile bonds that tied him to fundamentalism, each writer experienced certainty and embraced the absolute doctrines of the faith with either childlike enthusiasm or a careful adult decision. Although she was thoroughly enveloped in Mormon culture, Beck does not remember being fully convinced of Mormon doctrine as a child. She remembers sitting in the pew, flipping through the hymnal, and adding "in the bathtub" to each song title: "I Stand All Amazed in the Bathtub"; "I Know that My Redeemer Lives in the Bathtub"; "Behold a Royal Army in the Bathtub."

As an adult, however, she moved back to her hometown of Provo, Utah, and embraced her Mormon heritage as fully as she could. In her struggle to be the perfect Mormon wife, she tried to fulfill every expectation placed on her, from baking bread to attending the Relief Society. She made a conscious decision to accept the religious faith of her family in order to gain an authentic spiritual life.