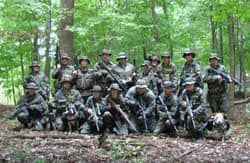 The Christian militia group known as the Hutaree, whose leaders were arrested by the FBI during Holy Week, is fond of quoting Christian scripture. Its website features this line from Jesus in the Gospel of John: "Greater love hath no man than this, that he lay down his life for his friends." The mission of the group is spelled out: "Preparing for the end time battles to keep the testimony of Jesus Christ alive."

According to the FBI, the group was planning to kill police officers and then attack the resulting funeral processions in an attempt to provoke an end-time battle. The word Hutaree, the group says, means "Christian warrior."

To the vast majority of Christians, the Hutaree represent an appalling distortion of Christian beliefs. Christians cringe to see quotes from Jesus used to support paranoid antigovernment violence. They also cringe to see this fringe group labeled as Christian -- as several major news outlets characterized it. What's Christian about it? Columnist Eugene Robinson wrote that in the case of the Hutaree he would "put the word Christian in quotes because anyone who plots to assassinate law enforcement officers . . . is no follower of Christ."

The discomfort is understandable -- and educational, for it gives Christians a chance to experience the incongruity many Muslims feel when the media refer to Muslim terrorists. Suicide bombers may cite the Quran and consider themselves Muslims, but that does not necessarily make them Muslim terrorists. Defining terrorists who quote the Quran as Muslim terrorists is no more enlightening than defining the Hutaree by reference to their avowal of Christianity. The religious adjective doesn't tell us much. Pamela Taylor, a Muslim activist in Cincinnati, argues, "The idea of Christian terrorism is ludicrous, in terms of theology, just like the idea that Islamic theology is responsible for terrorism is also ludicrous."

The surfacing of the Hutaree also reminds us that there are limits to Christian diversity. Not everyone who claims to be a Christian really is a Christian. That assertion may seem obvious in the case of the Hutaree, but it is one that liberal Christians, in other circumstances, are often reluctant to make. In most discussions, liberal Christians are inclined to be inclusive when it comes to issues of doctrine and practice, and are wary of anybody trying to enforce an orthodoxy. If you say you are a Christian, aren't you a Christian? Well, no. Christianity is not infinitely elastic, in doctrine or practice. Jesus did say those disturbing words: "Not everyone who says to me, 'Lord, Lord,' will enter the kingdom of heaven."

Reprinted with permission from the Christian Century magazine. Subscribe here.