Clouds, When Determined by Context 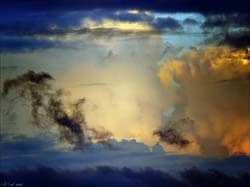 Radio on: March, 1950, station WING out of Dayton, Ohio, 1410 on the AM dial. "The Bible Speaks," and your hosts Doyle D. Warner and G. Gene Honer are giving it voice over the air. Two two-bit radio preachers bringing you the news -- on scripture time. Prophecy; ancient patterns revealed; the Russian scheme foretold. The end, nigh. Unless, that is, we heed the warning. To wit: Look to the sky. Not for the Second Coming, but for death from above. Russian bombers, jet fighters, flying fortresses. Maybe even -- scripture suggests -- Russian UFOs. Daniel predicted as much, say the preachers: "Desolation coming from wings overhead."

Are these broadcasters insane? Are they lunatics, their spittle like static as it crackles against their microphones? Is anybody listening? Does anybody care?

Abraham Vereide, the fundamentalist leader in whose files I found transcripts of Warner and Honer's broadcasts, cares. In 1950, Abram, as Vereide is known, presides over the most elite fundamentalist organization in America, International Christian Leadership (ICL). Started in 1935 with what Abram believed was a new revelation from God instructing him to organize an "avant-garde" with which to take back America for Christ, by 1950 ICL counts among its members several dozen congressmen. Among them: Senator Homer Capehart, an Indiana Republican who'd nearly weep when he thought of the plight of former Nazi SS men, barred from America for no crime greater than German patriotism; Senator Ralph Flanders, a Vermont Republican who attempted to amend the Constitution to make Christ king of America; and Senator Absalom Willis Robertson, a Virginia Dixiecrat whose son, Pat, would do his best to make Flanders' dream a reality.

Such men, pillars of the establishment, are not far removed from Warner and Honer's end of the radio dial. Since the start of 1950, Abram, their spiritual mentor, has been collecting and filing transcripts of Warner and Honer's program among his collection of newsletters and tracts and broadsides. It's the ephemera of fringe fundamentalism -- Christian Patriot, and Christian Economics, and a monthly chronicle of Soviet espionage and theological counterweapons titled Intelligence Digest -- funneled into Abram's files, there to be squeezed, distilled, and transformed into Bible lessons for congressmen. Abram never speaks to his disciples of UFOs or death from above, but he knows how to hear the signals, to make sense of the code -- to translate airwaves from Dayton and rants from the dozens of letters he receives every day from burghers and petty officials into breakfast club homilies, garnishes for eggs and bacon, and the bonhomie of political piety. Abram is the middle man. Abram makes fundamentalism sound sane.

Maybe it is. Or, reasonable, in the literal sense of the word, which is the only one in which men such as D. Doyle Warner and G. Gene Honer can believe. That is: created by cause. Think of the moment at which they're channeling their prophecies into the nights of Ohio, the "hard heart of hickland" in the vernacular of those who know that purest Americana is lousy with corruption and sin, the decadence of victory and the nightmares "our boys" brought home from the war, more crippling than any social disease. It's just five years after VJ-Day, and Harry Truman, a shoe salesman puffed into power by the racketeers of the Pendergrast political machine, is steering the nation toward yet another field of blood and gore and dead young men. They do not quite understand why we fight in Korea, but then, they didn't quite understand the last war, either. If they'd been soldiers, they might've seen firsthand the "wings" Daniel dreamed of, the bombing, the cities of friends and enemies in desolation, indeed.

"How doth the city sit solitary, that was full of people!" laments the prophet Jeremiah. "How is she become as a widow!"

If the listeners were too old for fighting, they've seen the widow just the same, in the newsreels that preface every movie. The movies themselves are filled with men who aren't quite right, men who're afraid, men who have seen things. Orson Welles slides through the ruins of postwar Vienna in The Third Man, telling his buddy to forget the orphans poisoned by Welles' snake oil. There is no right or wrong anymore. In D.O.A., the best of the B's, a man goes to the police to report a murder -- his own, by radiation poisoning. Even comedies are peculiar: picture Jimmy Stewart lost in his vapors, raising a toast to an invisible rabbit called Harvey. In science fiction, American G-men race against red agents to find the ultimate weapon, The Flying Saucer.