Is Disney Bad For Your Child's Health? 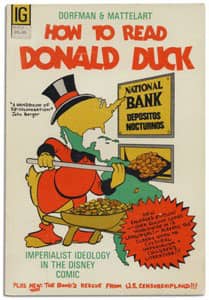 Once upon a time in a land far away, two handsome scribes warned of a dangerous evil threatening their beloved land. They drew their mighty pens and wrote a book, hoping to warn their countrymen before it was too late.

The land was Chile, the time, 1971. The scribes were Ariel Dorfman and Armand Mattelart. The dangerous evil was North American imperialism. The book was How to Read Donald Duck.

Dorfman and Mattelart had noticed that the Disney comics published in Chile in the early 1970s supported a conservative ideology that was opposed to the growing hopes in Chile for autonomy, decolonization, and socialism. At the same time that the democratically-elected Chilean President Salvador Allende was pursuing leftist social reforms, Donald Duck comics featured stories in which evil characters stole property from the rich, while the rich resisted through use of arms.

In a depressing example of life imitating art, in 1973 General Augusto Pinochet, backed by the United States, led a military coup against the government. Henry Kissinger, then U.S. Secretary of State, said:

"I don't see why we need to stand by and watch a country go communist due to the irresponsibility of its own people. The issues are much too important for the Chilean voters to be left to decide for themselves."

Here is a short list of the coup's many unpleasant results for vulnerable Chileans. They are drawn from the extensive review of U.S. covert operations in Chile known as the "Church Report," after Senator Franck Church of Idaho, Chairman of the Senate Select Committee to Study Governmental Operations with Respect to Intelligence Activities.

Augusto Pinochet -- our man in Chile! The military dictatorship lasted until 1990.

It's not very pleasant to think that our adorable Donald Duck could have played a role in preparing for Chile's military coup. Our brave scribes, Ariel Dorfman and Armand Mattelart, were forced into exile. They had hoped to save their country from torture, summary executions, and murder, but what can anyone do when a country's military is against the people?

But we can still read their book, and remember that popular entertainment, even silly little things like comic strips and other stories for the kiddies, are not politically neutral. They mean something, and it might be up to us to discover the political interventions embedded in their imagery and their narratives.

It was with this precaution in mind that I went to see Disney's latest feature, Prince of Persia: The Sands of Time. I had some concerns. I was worried that it would be like 2006's dreadful movie 300, propaganda in the service of a neo-imperialistic ideology aimed at military intervention in Iran.

I didn't need to worry. First of all, the Persians in Prince of Persia are noble, attractive, intelligent, and virtuous (all except the villain, of course). We root for them as they save their country from a potentially miserable future. The movie is about preventing a coup d'état. And the movie for the most part eschewed the standard Hollywood Oriental stereotypes. Sure, there were a lot of exotic characters, but none more or less exotic than those in Disney's European saga, Pirates of the Caribbean.

Furthermore, for propaganda like that in the Chilean Donald Duck to have any effect, the child has to be interested in the story. Kids won't be drawn into this large, noisy, bland, incoherent piece of junk. They'll be too busy rolling their eyes over a really stupid kiss and covering their ears during one of the loudest and most chaotic fight scenes I've ever seen.

I'm less sanguine about Disney's latest Tim Burton feature Alice in Wonderland, now on DVD and Blu-ray. Burton's version is an imaginative sequel to Lewis Carroll's Alice's Adventures in Wonderland and Through the Looking-Glass. What if Alice, just on the verge of womanhood, just confronted with an unwanted marriage proposal, fell down that rabbit hole one more time?