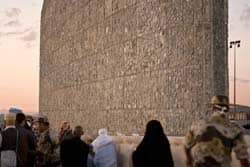 The concrete pillar stood yonder and as I approached it with a handful of pebbles, I felt a certain stir of emotion.

I was brought up on the foundations that there are no idols to be worshipped and that we need no props to reach our Creator, and here I stood ready to pelt an innocuous looking concrete tower, called the Big Satan, with stones.

Before I stopped and renounced my obligation of doing what had been ordained, the significance of the ritual I was supposed to embark upon struck me. Yes, we needed no idols but here is Allah Subhanahu wa Taala, telling us that we need to stone this idol called Satan. This exercise meant going against the conventions that I have become used to. This exercise meant that while no props were required for reaching out to Allah, here we were to violate this conventional wisdom by seeing a concrete pillar as the accursed one and then pelting it with stones. This was an exercise to instill in us the reality that the All-Powerful can command us to accept what is beyond reality as and when He pleases.

The shattering of this mindset also testifies to the fact that the Hajj is beyond symbolism and a set package of exercises, as many would have us assume. The mere act of stoning a concrete pillar was an act to inform us that the Hajj is not an ordinary event but an extraordinary experience where even conventions change. The rituals of Hajj are not to make the pilgrims to go mindlessly through the motions prescribed in textbooks and return home with a 'certificate' of having been there.

The act of gathering Muslims from all corners of the inhabited world is much more than making them go through a set of prescribed rituals. If it were so, then we could have been asked to gather in congregations like we do on the two Eids and conduct such an exercise.

However, the largest congregation of people on earth in a single space needs to be examined from the perspective of the Prophetic advice contained in his last Hajj sermon to the believers where he directed them to convey the message to those who were absent from this great assembly.

The fact that he said that the message be conveyed to those absent is not just an old message but it is also an obligation to experience anew and then convey this new experience to those who could not come. In a world that counts more than 1.25 billion Muslims, this also means that Muslims are required to focus on the need to develop, advance, and utilize means of mass communication, even if we are to suppose that only Muslims are the 'absent' ones to be addressed. In reality, the entire humanity is the real focus of this command. Thus, the Muslim responsibility stretches to not only developing means of mass communications but such means of mass communications that it will convey the message of 'Peace' to the entire humanity.

This should make the Muslims reflect on how far behind we are in fulfilling this duty, especially when we see that we did not invent the printing press nor did we excel in using it and that we neither own the networks, nor did we develop the satellites and cables that carry these networks. The need to rectify these shortcomings should be addressed from a host of aspects: the entrepreneurs must seek ways to develop media ownerships, the youth should seek the scientific empowerment to be able to develop and control new and more effective means of mass communications, and those blessed with chores of leadership need to introduce policies that encourage such pursuit.

The Hajj experience starts with the donning of the Ihram, a uniform for all, surpassing all socioeconomic divisions. This means that all classes that are normally held away from each other due to social barriers are now free to communicate with each other, to learn and share. The coming together of so many experiences is an occasion for the Muslim Ummah to keep abreast of what is happening in the Muslim and other non-Muslim lands all over the world. The sharing of joys and pain carries another significance beyond the mere act of socialization. It needs to be understood in the light of the Qur'anic admonition that the Ummah is like one body, feeling its joys and pains. Thus, when the pilgrim from Chechnya, Palestine, Iraq, or Kashmir relates his tales of sufferings, the other Muslims need to go beyond just giving him their box of Kleenex. They need to take actions that can promote justice in these areas and anywhere else where there might be suffering and injustice.

The social dimension of Hajj is to help Muslims refocus their energies so that they do not forget what is happening the world over and take time to examine their situation.

They need to examine their situation, such as the inability of the Muslim leadership to respond to the growing challenges. The stones that we throw at the Satans need to picked up and recast against the barriers that block our spiritual and physical progress and development.

This article is reprinted with permission from IslamiCity.com.