A poem to mourn a poet. It made me think of "Loki's Song."

This is the story that I was told of Mikal the Ram, not so many years ago:

In the early summer every year, the Kingdom of Calontir holds a war. The Lilies War, as it's known, is a weeklong SCA event held at a campground about half an hour outside of Kansas City (or, as it is known in the Society, the Barony of Forgotten Sea.) I have never gone, because I have never been able to afford a week off work, but it's the height of the year for many in the area. It's a camping event, all outdoors, which makes it easier to pretend it's 1100 A.D.

This particular year, just before Lilies began, storm clouds gathered over that part of Kansas. On the first day of Lilies, when people were arriving to put up their tents and say hello to their friends, the clouds opened up and rain fell down in sheets, and it never let up until the day Lilies ended, when the sun finally reappeared and the mud started to turn back into dirt, just in time for everyone to pack up and go home.

About the fourth day of this mess, Mikal the Ram, dressed in his Nordic regalia, sheepskin and all, decided that he had had enough. He stamped out of his tent into the rain. His friends inside called out to him to get back inside before he caught his death in the storm, but he didn't listen to them. He went out into the middle of the muddy field, and stared up at the sky.

The song was one he had written for the god of fire and mischief. It was simply called "Loki's Song," and it went like this:

When I picture this in my head, I picture old Mikal -- think about Falstaff wearing a sheepskin and you'll get the picture -- standing alone in the storm with fire in his eyes and mad laughter roaring from his breast. I picture him shaggy and crazed and ornery, exactly like the Ram he named himself after. I hear him daring Thor to keep the storm going -- mocking the Storm God to his face.

I smile when I think of that. Once, when I was on a date, the clouds opened up and rain fell in sheets for exactly the length of time it took for my girlfriend and I to run across the parking lot and get inside my car. The moment I started the ignition, the rain stopped. We sat there, dripping and shivering, and looked at the sudden reappearance of the sun. I could only raise my fist in the air and shout, "Thor, you asshole."

I think of Mikal the Ram bellowing at the gods, and I felt kinship, for I have bellowed at them too.

The man in the blue flame shirt had just finished speaking. He had to stop several times in the course of his speech to choke back tears. I felt sorry for him, and I felt envious, as well. I had liked Mikal the Ram, but the entire funeral seemed distant to me, something meant for other people. I was not grieving. Not really.

J. Michael Shew had taught art an elementary school. His principal was the next speaker. He was a bald man in a brown suit who clearly did not like public speaking.

"I've only been principal for a few years. Michael had been there long before I ever got there. But my predecessor told me all about him: how Mr. Shew loved his students, loved to get them to play with art. He went out of his way to connect with them," said the principal. I listened to him describe how crazy Mr. Shew had introduced Talk Like a Pirate Day to the school without warning one year when he appeared for work dressed in an eye patch and a tricorner hat. I knew this man was a stranger. This man was not here for Mikal the Ram, and may not have even known about Mikal the Ram. He was here for J. Michael Shew. And I realized in that moment that all I knew of J. Michael Shew was what I had been told in the past hour.

Who was J. Michael Shew? He was an art teacher. He had been married for years to a woman named Ginger. He had no children, though he had loved children. He drew cartoons and designed sets for church plays, and had even written a handbook for designing sets on a budget that had been used for church productions across the country. Once, in the middle of acting in one of these church productions, he had inadvertently hiked up his costume and flashed his BVDs at a crowd of unsuspecting church ladies. 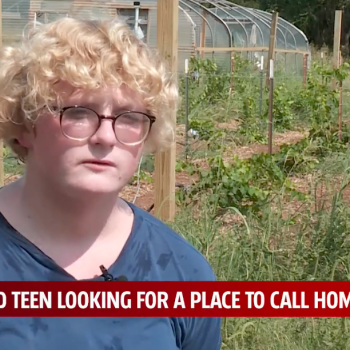 Oklahoma Teen Seeks Home After Adoptive Family Kicks Them Out for "Being...
Hemant Mehta
2 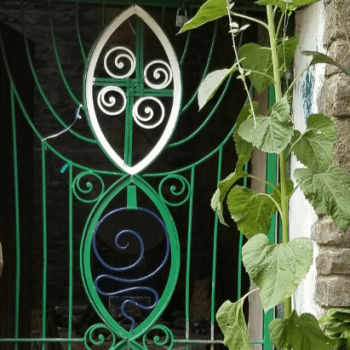 The White Spring
Annwyn Avalon
About
Get Patheos Newsletters
Get the latest from Patheos by signing up for our newsletters. Try our 3 most popular, or select from our huge collection of unique and thought-provoking newsletters.
From time to time you will also receive Special Offers from our partners that help us make this content free for you. You can opt out of these offers at any time.
see our full list of newsletters