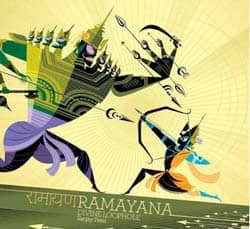 Lost in the never-ending debates about biblical inerrancy and infallibility is the recognition of the Bible's worth as a great work of literature. Lost is the focus on how it has inspired countless translations and interpretations, both written and visual. If anything, we should at least be able to agree that it and other sacred texts of the world's major religions are works of immeasurable literary value that have stood the test of time and will most likely endure, in one form or another, until the end of time.

Artists have attempted to tell the Hebrew/Christian mythology through a variety of media and some have succeeded better than others. Of course, looming behind all such work is the Divine proscription against the production of graven images. Muslim artists are bound by a much stricter prohibition, which is why we never see images of Allah or Muhammad and why Muslims are so outraged at satirical images of them. Thankfully, Hindus, to my knowledge, have not had to reckon with such theological speed bumps and have created beautiful works of art inspired by their sacred texts, which have also increasingly permeated popular culture. One of the more recent examples of this is Sanjay Patel's latest book, Ramayana:  Divine Loophole, a visually stunning re-telling of one of the most famous sacred stories of all time.

There can be no doubt that Pixar Studios is one of the most talent-filled and successful animation studios of all time, and one that clearly benefits from a diversity of races, ethnicities, and faiths. Outside of his work as a lead animator and storyboard artist on Pixar films such as Monsters, Inc., A Bug's Life, Toy Story 2, Cars, Ratatouille, The Incredibles, and Toy Story 3, Patel spent four years working on Ramayana:  Divine Loophole. How on earth he had a social life or slept is beyond me! His book also includes glimpses of his creation process, as the last several pages feature early sketches of his work before he scanned them into his computer to complete the work with Adobe Illustrator. These images give us a glimpse into his thought process as he determined what shapes these characters would take.

The bulk of the book tells the story of the relationship between Rama and Sita, and concludes with portraits of major characters in Hindu mythology along with a brief description of them. Rama, an earthly incarnation of the god Vishnu, descends to earth to defeat Ravana, the ten-headed king of demons. Along the way, Rama falls in love with Sita, who according to legend, is the "avatara of the goddess Lakshmi" (145). Rama, his stepbrother Lakshman, and Sita are exiled from their kingdom by Rama's evil stepmother who has political designs of her own. During their exile, Ravana captures Sita and Rama undertakes a rescue mission that includes some of the more memorable characters and events in all of mythology. Rama's power and skill aside, Hanuman is certainly one of the more captivating characters in the story.  If Christian scripture tells us that we can move mountains with faith the size of a mustard seed, we must marvel at Hanuman's faithfulness to Rama as he lifts an entire mountain and flies quickly with it to bring healing herbs and ingredients to save the wounded Lakshman.

Fans of Pixar films often find the opening and closing credits of their films to be just as beautiful as the films themselves. The closing credits to Wall-E retell the story of the film through the history of art. Patel's book looks less like a Pixar film than the animated credits that precede or follow one, and that's a great thing. The highly stylized illustrations of Ramayana serve the narrative better than the "life-like" animation of Pixar films themselves. In over 100 illustrations, Patel juxtaposes countless shapes and colors to present a vibrant text truly worthy of the gods.

This book deserves at least three readings. Read it once to (re)familiarize yourself with the story. Read it a second time to follow the visualization of the story. Finally, "read" it a third time to hover over the beautiful images that Patel has given us.

Sanjay Patel is also the author and illustrator of The Little Book of Hindu Deities.

About J. Ryan Parker
J. Ryan Parker is the creator and editor of and main contributor to Pop Theology ( www.poptheology.com ). A fourth-year PhD student in Religion and the Arts (with a focus on film) at the Graduate Theological Union in Berkeley, California, his research...