Initiation: Being Accepted Into Service 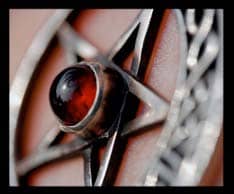 Initiation is the most daunting aspect of Pagan religions. Group or self, administered by a priest or a God, a public event or a private revelation, initiation is something that changes your life.

What is initiation? Initiation is the act of being accepted into a spiritual tradition. That's right, not dedicating yourself to study but being accepted by something outside yourself. This is why "self-initiation" is a really improper term, although initiations do not always take place within a group.

What all initiations have in common is that they are an encounter with the unknown. In the typical Wiccan initiation initiates are not told what will happen to them. Like those who attended the Eleusinian Mysteries, they know that certain things may happen but they do not know all. In group initiations you are at least aware of who is initiating you and why. Private initiations into the service of a God/dess are even more disorienting.

When I discovered Wicca, I dedicated myself to a year and a day of study and thought of it as a type of initiation. I was incredibly wrong. My first initiation came a few months later, was terrifyingly wondrous, and this is the first time I ever shared this with anyone.

I'd been reading the Farrar's and trying my hand at astral travel. At 17, the closest thing I had to trance music was Madonna's Ray of Light album, so I had it playing through my headphones as I dropped into deep meditation on my bed. I had been trying, like any new Witch, everything I'd read in books, and pushing my consciousness from my body to explore the world was something I desperately wanted to master. I had a desperate need to prove magic was real, to prove that my newfound faith was real, and to prove I wasn't losing my mind. On the cusp of womanhood, I was suffused with drama.

I managed to free myself from the body that night and was full of tremendous joy. I wanted to go somewhere free and green and found myself rapidly descending on a green field under a blue sky. It was an idyllic, screensaver-worthy picture of wide, open spaces. Yet as I descended, something was coming toward me. I found myself rushing straight toward a black man.

He was not black as in African. Black was not so much a description of looks as it was of who he was. He was utter blackness: the extreme darkness of moonless nights, of empty space, of deep caverns, and dreamless sleep. While he had dark hair and eyes and black clothes, black was what he was and not how he appeared.

Even though I was out of my body and in control of my movement, I panicked. I was falling fast and couldn't stop myself; I was trying to act in defense of my astral body, as though I would break an astral bone. As if caught by a sudden current, my direction changed. I was sucked along at the same speed parallel to the ground and caught by the black man.

In sheer panic I pushed myself away from him, back into my body, and lurched upright. I didn't know what had happened. Had I found the God of the Witches Murray had described? Had I been caught up by the Christian Devil? Had I simply been sidelined by a malevolent being?

The interesting thing was that even though I was completely shaken and terrified by the experience, I was not frightened of the black man. As I recovered from the shock I found I needed to interact with this being again, I needed to know him and discover why I was drawn to him. I learned over the next few years about valid experiences and wishful thinking. I learned to discern the desires of my own heart from the messages from the Gods. The black man was the God of Witchcraft, and he called me to his service. I was initiated into something unknown, terrifying, enchanting, and I have been grateful these past ten years for that experience.

That is my story. I think most Pagans have a story of initiation that is similar. These private initiations are important only to the person who receives them. Though we may find comfort in sharing our stories, these initiations give us no magic title or pompous status.

Just like your Sam's Club card won't work at Macy's, these initiations are only valid within our own soul and have no solid currency in the Pagan community at large.

The most talked of form of Pagan initiation is that of acceptance into a group or tradition. The OTO and Golden Dawn have laundry lists of grades and levels, and most Wiccan groups have three levels of initiation, sometimes four. These initiations are of great importance within their tradition and command a certain amount of respect in the greater Pagan community but again have a limited sphere of influence.