It's the Occupation, Stupid 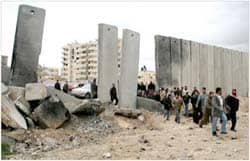 With its deadly commando raid on a Gaza-bound humanitarian flotilla that left nine civilians dead and dozens injured, Israel once again resembles a self-destructive Goliath to much of the world.

Predictably, though, American pundits seem distracted by Israel's double-talk and moral justifications and intent on reducing this latest episode to a question of who threw the first punch on the ship. Instead, we should analyze the tragedy as a recurring symptom of Israel's brutal 43-year occupation of Palestinian territories, which has had grave consequences for the security of Israel, Palestine, and the United States.

America's ideological, financial, and military support of Israel's occupation is "untenable." It erodes international solidarity, leads to cultural isolation, and further engenders anger and mistrust among Muslim communities around the world.

Since 1967, Israel has, in violation of international law, occupied the West Bank, Gaza, East Jerusalem, and the Golan Heights, all the result of its "Six-Day War" against Arab nations (a conflict launched by an Israeli preemptive strike against Egypt). Following that war, the United Nations immediately passed Security Council Resolution 242, which called for "the establishment of a just and lasting peace in the Middle East" and the "withdrawal of Israeli armed forces from territories occupied in the recent [1967] conflict."

But today, 43 years later, nearly 500,000 Israeli settlers reside in occupied Palestine, 300,000 of them in the West Bank -- all of this in direct violation of the Geneva Convention, the European Union and the United Nations.

The 4 million Palestinians who live on these lands exist in squalid, occupied environments. Desmond Tutu, one of the leading opponents of apartheid in South Africa, said Palestine "reminded me of what happened to us black people in South Africa." He further warned, "[Israel would] never get true security and safety through oppressing another people."

Jimmy Carter has described this as "a system of apartheid, with two peoples occupying the same land but completely separated from each other, with Israelis totally dominant and suppressing violence by depriving Palestinians of their basic human rights."

As Israel and the United States make excuses and as the impotent international community fails to budge them, Palestinians languish without self-determination and statehood. Their daily existence is paralyzed by roadblocks, humiliating checkpoints, a non-functioning economy, extrajudicial killings, and a 403-mile wall through and around the West Bank, which effectively imprisons West Bank Palestinians while allowing Israel to further annex large swaths of Palestinian land.

Despite empathizing with the "humiliation" of the Palestinian people and condemning the settlement expansion as "illegal," President Obama recently pledged a record-breaking $3 billion of military aid to Israel.

Citing "shared democratic values" and "shared strategic vision in the Middle East," the U.S. has guaranteed Israel a "qualitative military dominance" over its Middle East neighbors since 1967. Israel is the largest annual recipient of direct U.S. economic and military assistance since 1976 and the largest total recipient since World War II.

The militarized occupation of Palestine is made possible by the use and abuse of U.S.-manufactured and -sold Apache helicopters, F-16 jets, missiles, and tanks. U.S. Annual Foreign Military Financing (FMF) grants to Israel represent 18.2 percent of the overall Israeli Defense budget, and Israel conveniently uses almost 75 percent of these funds to purchase U.S. defense equipment. In fact, Israel purchases nearly $7.2 billion in weapons and military equipment annually from the U.S. and is, unsurprisingly, the world's largest U.S. arms importer. Not coincidentally, Israel is also largest fleet owner of F-16 jets -- second only to the United States