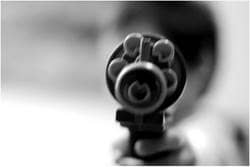 Manis Friedman "doesn't believe in Western morality." So the Chabad rabbi from Minnesota stated in these pages last issue. "The only way to fight a moral war is the Jewish way: Destroy their holy sites. Kill men, women and children (and cattle)."

Friedman was answering the question, "How should Jews treat their Arab neighbors?" Or rather, as he clarified afterward, he was describing how he believes Jews should behave when they find themselves at war with Arabs. His answer was that they should fight brutally, without regard for civilian lives, indeed genocidally. His source, he said, was the "Old Testament," in itself a strange term for a rabbi to use for the Hebrew Bible.

Interviewed afterward by The Forward, Friedman said his words about women and children should have been in quotes because they were taken from the Torah, "though he declined to specify from which part," the newspaper reported.

Friedman's statement raises several questions. One is whether Moment should have published such hateful language. The answer to that is a simple "yes," because journalism's job is to tell people what's happening in the world, not to prettify it. Friedman was one of ten rabbis to answer Moment's question, and the only one to take the stance he did. But he speaks for an ideological trend in the Jewish world that needs to be recognized, understood, and strongly answered. Which brings us to the second question: How does someone come to see such a distortion of Jewish ethics as "the Jewish way"?

Friedman may think he's presenting old-time Judaism. In fact, his words are an example of the thoroughly modern phenomenon known as fundamentalism. Fundamentalists are frightened by the openness of the modern world, by the autonomy of the individual, by modern insistence on reaching truth through reasoned debate. They want to feel certain that they are following an unambiguous religious authority.

That desire makes humanistic religious ethics appear suspect in their eyes. After all, the Western philosophic tradition, from the Greeks to Kant, can also produce ethics that stress the value of every human being. If one follows such ethics, the fundamentalist worries, how can one be sure one is doing God's will? Perhaps one has been misled by a morality "of human invention," to quote Friedman.

The fundamentalist solution has several elements. First, insist on heteronomy, on an authority outside oneself. Second, assign that role to a person or a book that speaks for God. Third, assert that the sacred text has an obvious "literal" meaning. And fourth, proudly derive from that text the willingness to believe and to do things that are scandalous in ethical terms -- indeed, that defy your own basic moral instincts. That way, you can be sure you are following the outside authority. Declare, for instance, that "the Jewish way" requires killing "men, women and children (and cattle)" in times of war.

Another common quality of fundamentalism, as University of Virginia sociologist James Davison Hunter has written, is fusing religion with national identity. Again, this is hardly unique to Judaism. Hamas has turned Palestinian nationalism into a sacred Islamic value. As Hunter writes, Sikh fundamentalists sought independence from India for a Sikh nation, while Hindu nationalists want to turn India into a pure Hindu society. In the process, universalist ideas are erased from faith, and outsiders are dehumanized.

Friedman wasn't speaking for Chabad as a whole. Since the death of its rebbe, Menachem Mendel Schneerson, fifteen years ago, Chabad hasn't had one voice that speaks for the movement. Still, Friedman's comments fit a context. Chabad has taken a conspicuous role on the religious right in Israel, and Chabad rabbis Shalom Dov Wolpo and Yitzhak Ginsburg are among the right's most extreme spokesmen. Last year Wolpo suggested that then-Prime Minister Ehud Olmert should be hung for his peace contacts with the Palestinians. Ginsburg wrote an infamous defense of Baruch Goldstein, who massacred twenty-nine Muslims at the Tomb of the Patriarchs on Purim, 1994. That said, the dynamics of fundamentalism, including denigrating the value of Arabs' lives, extends far beyond Chabad on the religious right in Israel and among its supporters elsewhere in the Jewish world.