Anyone who Googles your background will find stories about the 1998 article you reported for Esquire after spending time with various polygamist families in the West. Pretty easily via Google, you can find web posts from people who liked that story and those who hated it. You'll also find people who say that HBO swiped your idea for the "Big Love" series. Can you clear up that confusion?

It's a little complicated. I wrote that article in 1997 and it was published in 1998. It's true that the original title for my article was "Big Love." That's the title I gave it and I thought Esquire was going to publish it under that title. When it came out, Esquire had renamed it "The Lonely Polygamist." They did that without even telling me about the change, but I thought it was a better title at the time. Then, some years later, "Big Love" came out on HBO and there's nothing more I can say about that connection. I don't know anything more than what I've just said. If someone online says HBO ripped off my article, then that's just their perspective. I don't know that at all.

Your Esquire article has the same title as your book and there are some similar themes here. The two texts -- Esquire and your book -- open with similar themes. Is this novel the book-length version of the Esquire piece?

My original article was not the basis of this novel, no. That Esquire piece was just the starting point of my research into polygamy. I did years of work after the Esquire piece.

Having read both the Esquire piece and your new novel, I do agree that these are different stories -- although both of the men at the heart of the stories are conspicuously big, tall guys under tons of pressure from their wives.

But, let me ask you about another important reference when Americans think about Mormon splinter groups: Jon Krakauer's Under the Banner of Heaven: A Story of Violent Faith. I run into lots of Americans who don't know anything about polygamy or the Mormon tradition except what they've read in Krakauer's book. I've got to say to readers of this interview: If that's all you know about this subject, The Lonely Polygamist is going to be a real shock! What would you say about Krakauer's book?

I would say that Krakauer's book is not the right book to read if you want to understand polygamy or the Mormon church. It is an interesting book, but it's all about a very, very small sliver of religious experience that comes out of the Mormon tradition. On top of that, he makes some logical leaps about connections between religion and violence that I'm not happy with at all. At its core, his book argues that Mormonism is a violent religion. Now, I grew up in the church. I have a very deep background in the church. That claim Krakauer makes is just absurd when I hear it, given what I know. Violence shows up in many religious traditions, but Krakauer's book takes those claims way too far.

Do you run into people who've only encountered this subject through Krakauer's book?

I have noticed people who seem to have a very strong reaction to my novel and I think that's because they've read things like the Krakauer book. They assume that anyone who would practice polygamy must be a violent, criminal child abuser. But that's not the experience I've seen meeting lots of people who live in these relationships. The people I've met are normal, wonderful, spiritual, nice people.

How many polygamist families did you get to know in your research?

Six or eight families. Let's see: some in suburban Salt Lake City, a couple in southern Utah, one in northern Arizona, and one in southwestern Colorado. These are families who easily let me into their lives and let me spend time with family members to see what it's like.

This is a novel, so I want to help our readers get a quick sense of the cast of characters. So, I'm going to name some of the main characters people will meet in the book -- then you tell me your concise description of each one, plus tell me how you'd like to see them cast in a movie version of your book, okay?

Golden Richards, the main character throughout the novel -- the father and husband trying to survive everything that happens. Describe him. And who plays Golden in your ideal movie version?

Well, he's a big, sweet, overwhelmed man who is out of his depth with his family.

If I was going to cast somebody to play Golden, it'd have to be somebody large and someone who can play Golden's clueless qualities, too. Maybe Jeff Daniels.

Yeah, I can see that! Good. Okay, so let's talk about Golden's most important wife, Beverly, who oversees the other wives and is so strict that many of the kids pretty much are in fear of her temper.

Beverly is the real power who rules the family with an iron fist and really holds everything together. But who could play that? Meryl Streep could, but Meryl Streep is a little too old now. Beverly is in her mid 40s. 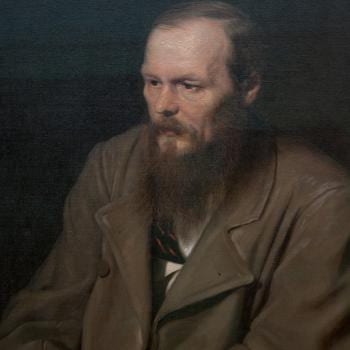 Charismatics, Superstition, and the Real Origin of the Peace Sign
Mary Pezzulo
Get Patheos Newsletters
Get the latest from Patheos by signing up for our newsletters. Try our 3 most popular, or select from our huge collection of unique and thought-provoking newsletters.
From time to time you will also receive Special Offers from our partners that help us make this content free for you. You can opt out of these offers at any time.
see our full list of newsletters
Editor's picks See all columnists