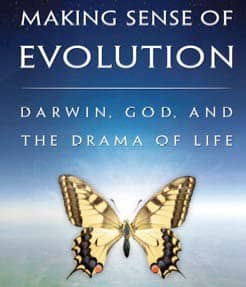 Making Sense of Evolution (Louisville: Westminster John Knox Press, 2010) is John F. Haught's invitation to a view of biological life as a drama with God's activity at its depths. Darwin's dangerous idea about the common ancestry of all life formed through natural selection has made many ponder whether God can be called the author of life anymore. Are biological accidents that lead to organisms with better fits in any given environment and considered over great spans of time the ultimate explanations of life? While Haught does not endorse the atheistic conclusions Daniel Dennett and Richard Dawkins draw from this natural process, he does think evolutionary science should shock theologians into new ways of thinking about God in relation to the world. Haught's answer is that life is a drama that, like any good drama, must contain enough novelty to keep an audience interested, enough coherence to maintain a story, and enough time for that story to unfold.

Haught is not interested in criticizing the science of evolution, only its scope. Of course evolutionary biology, like all science, can be improved, but it has withstood every test thrown its way. Thus, desires to reject Darwin should be expelled from churches and religious life. In fact, he believes theology can make even better sense in light of evolution. To support this belief he must devote sizeable portions of his argument to presenting the science and Darwin's personal struggles over the religious implications of his work. If for no other reason, Making Sense of Evolution should be read because almost every chapter begins with a readable introduction to the facts of evolution as related to specific topics such as the design and diversity of species. Readers should come away able to make sense of what scientists are talking about. But the life of Darwin is just as important in this book.

Darwin's personal discomfort with what he saw as the atheistic conclusions of evolution makes the point Haught uses to open space for theological claims. Once impressed by arguments that the universe must have a divine designer, the discovery of small variations among geographically separated species led Darwin to believe the origin and diversity of life occurred naturally though a gradual process over many years.

Haught believes this connection between a theological conclusion and its scientific replacement reveals that scientists have never really stopped doing theology. As long as atheistic scientists argue their explanations of the world should be accepted rather than theological explanations, they are inherently tackling theological issues. That is, "whenever evolutionists declare or imply that evolution is an alternative to traditional theological understanding, they are not yet doing pure science" (17). So when someone like Dawkins says natural selection caused an event instead of divine action, theological undertones live on in the form of this alternative ultimate explanation. The problem Haught identifies in this transition from theology to science is that both sides of the argument must have the same goal in order for one explanation to replace the other. However, if theology is not primitive pseudo-science and was never meant to be so, it makes no sense to say science has won the day.

Haught's basic answer to this problem is that science is science and theology is theology. Science considers physical causes while theology provides ultimate explanations. In his earlier and more technical book on Darwin and theology, Deeper than Darwin: the Prospect for Religion in the Age of Evolution (Boulder, CO: Westview Press, 2003), he methodologically distinguishes what he calls his "engagement" approach from the conflict and separatist camps (72-73). Conflict includes the stance just mentioned, that science replaces theology, as well as the reaction by intelligent design theorists that theology is the only true science. Separatists essentially hold an independence model for relating science and religion. Both are allowed to exist because any conflict or chance for constructive dialogue is ignored. Haught rejects these views in favor of his engagement approach, which looks to the heart of scientific knowledge to consider whether a divine depth remains. In Making Sense of Evolution this engagement approach results in what Haught calls a "layered" understanding of reality.

This layered approach holds that there can be many different explanations of a single phenomenon as long as the differences exist on different levels not in competition with one another. Haught's frequent analogy for clarifying this point relates to his method for delivering it, writing (24-25). The chemistry that allows black letters to appear on white pages and the author's intent in writing those words are different non-contradictory layers of explanation. However, the author's intent is the more ultimate explanation for any book's existence. Likewise, natural selection can account for life as can divine creativity at a deeper level. And furthermore, just like an author's intentions will not literally appear in the chemistry involved in printing, no evidence for God's action will be found in scientific studies of causation.