The Most Trusted Man in America?

By Jeremy Gillick and Nonna Gorilovskaya 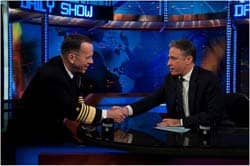 On January 11, 1999, a nervous 37-year-old comedian who could have passed for a college student settled into a host's chair that was too high, wearing a gray suit that looked too large. "Honestly, I feel like this is my bar mitzvah," he told actor Michael J. Fox, the guest sitting opposite him. "I've never worn something like this, and I have a rash like you wouldn't believe."

The rookie was Jon Stewart, and he was making his debut as the anchorman of Comedy Central's two-year-old The Daily Show. It was not his dream job: That one had gone to his predecessor Craig Kilborn, who had taken his frat-boy act to CBS' Late Late Show -- one of several gigs for which Stewart had been passed over.

Stewart then proceeded to dole out The Daily Show's usual sophomoric fare: That night, it was the engagement announcement of cartoon characters Popeye and Olive Oyl (complete with mandatory wedding night joke). The show's celebrity correspondent filed an interview with the aging actors who played munchkins in The Wizard of Oz -- "dwarf porn" and "dwarf tossing" were among the topics. But even on day one, the best part of the show was Stewart's commentary on the headlines, then consumed by President Bill Clinton's impeachment trial. "The important issue facing the U.S. Senate is how can it take a pointless, tawdry trial whose outcome has already been decided and make it last for six hilarious, humiliating months," he intoned.

During the following year, the show morphed into something altogether more edgy, showcasing Stewart's knack for thoughtful political satire. Although the program hasn't cast off all silliness and vulgarity, The Daily Show with Jon Stewart now wields a political influence far beyond its audience of nearly two million. Monday through Thursday, on a glitzy news set in New York City, the now graying anchorman -- aided by a stable of faux correspondents wearing expressions of gravitas -- spoofs politicians and America's 24-hour media culture. The method behind the madness? What Stewart, also the executive producer, and his writers call "fake news:" a humorous take on real events in a format that resembles "straight" news programs.

Throughout it all, a good-natured, ironic wit cloaks Stewart's anger. His acerbic jibes at the administration of President George W. Bush, particularly over the war in Iraq (The Daily Show's "coverage" of the war is called "Mess O'Potamia"), and the media's failure to perform its watchdog function, has resonated with a politically exhausted nation. New viewers have flocked to Comedy Central to watch Stewart openly question the war and confront hypocrisy, arrogance, and stupidity across the board.

The Daily Show's audience is one of television's youngest -- only 23 percent of viewers are 50 or older -- and one of the best informed -- even more so than viewers of CNN, C-SPAN, and Fox, according to a 2008 Pew Research Center study. As a result, politicians, A-list actors, public intellectuals, and pretty much anyone pitching a book, regardless of ideological persuasion, compete for spots on the nightly interview segment. The well-read Stewart has talked globalization and religion with former British Prime Minister Tony Blair and, over tea and Twinkies, questioned then-Pakistani President Pervez Musharraf about Osama bin Laden's whereabouts. Vice President Dick Cheney's wife, Lynne, regally swept in when her memoir came out, presenting Stewart with a Darth Vader statue and explaining that it was "an old family heirloom." (Dick Cheney is known as "Darth Cheney" on the show.) Actress Angelina Jolie has appeared, as have Senators Barack Obama and John McCain. Senator Hillary Clinton (whom The Daily Show has called "the first viable presidential candidate with a working uterus") scheduled one of her visits via satellite from Texas on the eve of the crucial 2008 Texas and Ohio primaries.

The Daily Show with Jon Stewartenjoys effusive critical and popular acclaim and has won eleven Emmy Awards. At 45, the once obscure Comedy Central comedian has become a media heavyweight. Last year, a Pew survey found Stewart to be one of the most admired journalists in America, tied at number four with news legends Dan Rather and Tom Brokaw. This year, Forbes listed him as one of the world's most powerful celebrities, with an annual income pegged at $14 million, and The New York Times asked: "Is Jon Stewart the most trusted man in America?"