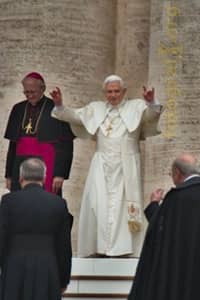 To many, the election of Cardinal Joseph Ratzinger as pope means the Roman Catholic Church is not likely to allow married or female priests, or modify its positions against birth control, abortion, and homosexual practice.

But to better understand his conservative stances on policy issues, one should take a closer look at the historical influences behind emerging Catholic fundamentalist theology.

For some, the name "fundamentalist" is a proud calling. Living in Texas, I used to jog every morning by a gravestone that proclaimed the deceased, "World's Foremost Fundamentalist." For others, "fundamentalist" is a term of derision that implies literal-minded, close-minded, or even stupid. But scholars use "fundamentalist" in a more technical sense. It does not imply styles of reading scripture or level of education, but rather resistance to the relativism of contemporary Western societies.

Originally fundamentalism referred only to conservative Protestants who, in the early 20th century, tried to shore up "the fundamentals" of Christianity. Now there are common references not only to Christian fundamentalists, but also Muslim, Hindu, Mormon, and sometimes Jewish fundamentalists.

Many Muslims, Hindus, and Jews are understandably not happy about having a term originating in U.S. Protestant squabbles applied to them. Likewise, Catholic conservatives bristle at any hint that there are Catholic fundamentalists. For most of the 20th century, Catholicism and fundamentalism were mortal enemies, each representing the whore of Babylon to the other.

What do Christian, Muslim, Hindu, and Jewish so-called fundamentalists have in common? It is their insistence that realms of the divine have not abandoned humans, but continue to communicate in no uncertain terms what it takes to bring humankind back in accord with the heavens.

The defining moment of his career may have been a professorial stint at the University of Tubingen in the late 1960s. The Tubingen openness to engaging Marxist philosophy and the radical student movement shocked Ratzinger, who moved more definitely toward the reality of revelation, the ground of certitude. As his theological career developed, he found a like-minded thinker in Pope John Paul II, who appointed him head of the Congregation for the Doctrine of the Faith (CDF). In that capacity, he investigated, excommunicated, or barred from teaching in Catholic universities handfuls of his most innovative theologians. In Ratzinger's view, they had proffered the dangerous suggestion that the Second Vatican Council (at which Ratzinger served as a consulting theologian) supported changing tradition, engagement with the world, and interfaith relationships.

This is the irony of fundamentalism.

As Islamic scholar and Duke religion professor Bruce Lawrence has pointed out, movements across various traditions that claim to restore ancient traditions are actually reacting to very contemporary circumstances. Fundamentalisms are not ancient, but are thoroughly modern themselves. Modern, relativistic societies actively produce fundamentalisms.

Who was the first fundamentalist pope?

Perhaps it was Pope Pius IX, whose first Vatican Council (1869-70) invented papal infallibility. Or maybe it was his successor, Leo XIII, who wrote the encyclical Testem Benevolentiae, largely seen as a slap on the wrist to American Catholic bishops who saw in modern U.S. approaches, such as the separation of church and state, good things for the church's future.

A strong argument can also be made that the recently deceased pontiff was, in fact, the first Catholic fundamentalist pope. Looking at the years since he appointed Ratzinger head of the CDF in 1981, it is hard to tell where the words of Pope John Paul II ended and the new Benedict XVI's words began. But with his embrace and celebration of modernity -- all that traveling, all those languages, all that interfaith dialogue -- no one thought to characterize John Paul II as a fundamentalist.

Fundamentalism is not anti-modern. It is the modern questioning itself, asking if relativism has gone too far, if God has abandoned the modern world.

Just before he was named pope, Ratzinger appeared to be calling for a Catholic reappraisal of the term. What often gets "labeled as fundamentalism," he said during a Mass he celebrated on Monday, is merely having "a clear faith, based on the creed of the church."

Whenever it started, Pope Benedict XVI can be counted on to continue this new Catholic fundamentalism.

This article is reprinted with permission from Duke University's News and Communications.

Julie Byrne is currently Associate Professor of Religion in the Department of Religion at Hofstra University. In addition to Catholic studies, Byrne writes and teaches subjects in American religious history, including gender and race, method and historiography, and culture and theory.