Praying Upon a Star

Praying Upon a Star: 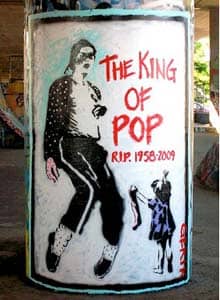 The King of Pop is dead, or is he? On June 25, 2009, we witnessed the physical demise of Michael Jackson, but the resurgence in media attention has brought new life to this cultural icon. In these mediated days, the stories of deceased stars not only live but are recycled and amplified via multiple off- and online media.

Seemingly infinite reflections upon the life of "the man in the mirror" continue to seize our attention. Headlines in major print newspapers and spots in key television outlets announced his sudden death, publicized his personal woes, and investigated the pharmaceutical causes linked to his cardiac arrest. Family, friends, and associates (close and not-so) have been interviewed, and his photographs and music videos played on a loop -- frequently during prime time.

Aside from traditional print and broadcast stories, we're also observing the resurrection of Michael stories online via a plethora of Web-based media. YouTube now hosts "The Official Michael Jackson YouTube Channel," subtitled "His music will live forever." The site that embeds the Thriller music video has seen more than 45 million views, and has more than 200,000 comments, alongside links to hundreds of other official and fan-produced Michael Jackson videos.

According to Emile Durkheim in The Elementary Forms of Religious Life, rituals (religious or secular) serve to revitalize communal sentiments and a sense of sacred purpose, which in turn generates potent feelings of collective "effervescence" or transcendence through identification with collective bodies. These days, rituals, including rituals of mourning, praise, and eulogies for celebrities, are often enacted in and through the media sphere.

In this sense, the public drama of the death of Michael Jackson can be understood as a media ritual that powerfully secures solidarity and even a higher moral purpose among fans and followers. With the Internet and online social networking platforms, admirers of MJ, including religious believers, can now participate in the creation of their own ritual and symbols of remembrance online.

Take for example, an online video entitled "A Special Tribute" to Michael Jackson posted on Tangle.com, a faith-based, family-friendly social networking site. Like many amateur videos online, this three-minute work features a PowerPoint slide show of pictures, accompanied by song and subtitles. However, what is especially interesting for contemporary religion and cultural expressions are the ways faith believers shape and appropriate popular cultural content in line with their beliefs and values. This special tribute video, for example, features a "God loves you" slogan on the bottom left-hand corner, and contains the following message akin to an evangelical call:

Michael Jackson had blessed us so much with his God-given talents. Praise God for Him. He will be sadly missed. This is a special song of comfort, hope, and love. That although we will never meet Michael again in this life, we will meet him again in the heaven and the eternal life, if we accept Jesus Christ into our lives.

Given Michael Jackson's global fame and immense popularity, it is perhaps unsurprising to find fan-produced forums, blogs, vlogs, and tribute dances. Nonetheless, another quieter but stable dimension of these online representations contains prayers and eulogistic comments to Michael and his family. On Beliefnet (purportedly the largest spiritual Web site not specifically affiliated with any spiritual organization or movement), fans have written to honor Michael and express their prayers for him to "rest in peace" in a higher place, and even to defend his reputation with spiritually-charged messages of damnation for critics. One poster, for example, wrote that: