Puddles of Blossoms: An Interfaith Marriage 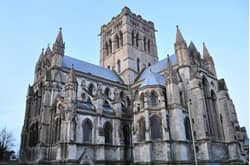 One of the big questions I had when I decided to marry a nonmember was whether or not Sam would support me in my faith. I thought about this a lot, discussed it when it came up with those I sought counsel from, and ultimately had no reason to believe he would be anything but supportive.

And, as I suspected, he has been the model of support. When I'm having a rough time, he gently suggests I attend the temple. Even when it comes to laws that would be hard for someone outside the LDS church to swallow -- think tithing -- he hasn't whispered a word of criticism or reservation. He attends sacrament meeting with me about every other week so I won't have to sit alone. We've made friends with other couples in the ward; he's accepted and fulfilled a calling to teach the teacher prep course (!), and we joined the bishop and his wife for a Thanksgiving Feast last fall. Although he's always clear (but respectful) about where he differs, he's allowed himself to be a part of the community. This, I understand perfectly, is out of love for me.

That's why, several weekends ago, when I realized that I hadn't been supporting him in his faith, I was devastated. No one asked that question before we married, no one asked if we'd support each other spiritually, and I'm ashamed to say it didn't once cross my mind. Even in the twenty-one months since we've been married, I've selfishly lapped up his support and even pouted about having to go alone to meetings. I've fretted the details of living my faith while married to someone who doesn't share it.

In my defense (sort of), Sam's renewal of faith is fairly recent, really since we went to Notre Dame in Paris last summer. But I've had many, many months to figure it out. What can I say? I am slow.

Recently, Sam has mentioned he'd like me to come to mass with him now and again, and I confess I hesitated. But a few Sundays ago, when I entered a time warp in the hour before my church meeting and realized when I went to leave that I was so late I'd surely miss the sacrament (has that ever happened to you?), I opted for a later meeting and went with Sam to his. I don't know how to describe it. I don't even understand everything that happened. But there was incense and music and a beautiful message, and when Sam introduced me to the priest, Father F. was so kind and glad to see me. But mostly, more powerful than all of that, was to realize what I had been missing, and, more significantly, what I had been denying Sam. He was clearly so happy to have me there, so happy to share it with me, so glad I wanted to learn the songs and figure out when I was supposed to sit and stand. We talked about getting more involved in that community, staying after for the social gathering, meeting people, making friends.

Afterward we sat in my car, parked in front of our apartment. In the last few weeks the trees have burst into pink blossoms, and the petals are just beginning to fall. There was a breeze, and as I apologized for my lack of support and wept a little, we both watched these delicate pale pink raindrops flutter down and pool in the street and on the sidewalks. It's shocking to me how much falling blossoms act like water, how they really do rain and puddle. And it's even more shocking to me that Sam forgave me, said we were learning and figuring things out, and that it was okay.

It made me feel again what I felt when I was in the very depths of the decision of whether or not to marry Sam. I was staying at my parents' house in Utah, running the quiet, ordered streets of their neighborhood, and listening to an interview with Eboo Patel, who was talking about his book Acts of Faith. Patel advocates the power and necessity of Religious Pluralism, which focuses on overlaps between faiths, uses the overlaps and differences to create meaningful communities and to effect change. And I stopped, put my hands on my knees, and was overwhelmed by a sort of vision of what my and Sam's marriage could be. That maybe it wouldn't be what I had planned when I was a little girl, that maybe it wouldn't look like my friends' marriages, but that maybe, just maybe, there was something we could do together, something important, something powerful, something that could only come when a little Mormon girl and a witty Catholic boy got together and were brave enough to stay together and raise a family in that overlap.

And I can say this for that ideal: I don't know if we're there yet; I don't think we're yet "powerful," but I have been astonished to find that, although we've had our rough spots in the last few years, exactly none of those rough spots have been related to our differing faiths. That aspect of our relationship, the part where we don't agree on every point of doctrine, has been nothing but intellectually and spiritually enlarging.

At least it has for me. And for Sam, well, I hope to show him I can be as unswervingly supportive as he's been to me. I'm grateful he's shown me how to do it.