Remembering My Fundamentalist Past 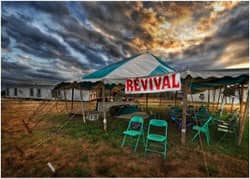 I grew up in a small town Baptist church in the 1950s. We regularly sang hymns like "Just as I Am Without One Plea," "Give Me That Old Time Religion," "Power in the Blood," and "The Old Rugged Cross." We knew that Jesus died for our sins, we memorized Bible verses, and we competed with one another for prizes in Bible drills. Now I've come a long way since those childhood days in King City, California. But, the faith of my childhood is still real to me. I recall "coming forward" during a revival meeting led by Leonard Eilers, a cowboy evangelist who spent a week at our church one summer. I'm pretty sure that he wrote the revival theme song, "The Roundup for God," since I can't find it on Google. I recall him singing "Put your foot in the stirrup/ Climb up on the horse/ The Roundup for God is On," as I walked to the front of the church to accept Jesus as my personal savior in 1960.

The country folk of Community Baptist Church were plainspoken and generous. They, no doubt, suspected the orthodoxy of the Methodists and Episcopalians, and had their doubts about the Catholics; but their faith, basic as it was, with no frills, helped them face sickness, aging, and death. They believed that God had a place for them in heaven, and that gave them courage and strength to face cancer, diabetes, and heart disease. Their simple, unadorned faith was a far cry from the polarizing and angry fundamentalist preachers I often see on television.

Now, while I'm quite ambivalent about fundamentalism and its dualisms of saved and unsaved, heaven and hell, and righteous and unrighteous (and I'll get to that), I am grateful for a childhood religion that enabled me to learn the Bible and experience God as real for the first time. Although I've had to unlearn quite a bit in relationship to homosexuality and eternal damnation, my Bible-believing roots prepared me to stretch my theological wings later in life.

By the time I was a teenager, I had outgrown my childhood religion. Its god was too parochial, too narrow-spirited, and too limited for a precocious teen who found inspiration in Whitman, Thoreau, Taoism, Timothy Leary, Carlos Castaneda's "Don Juan," and the Upanishads. But, I still claim to be a biblical Christian and now see the Bible as a source of open-spirited and life-changing spiritual affirmations. I doubt if I would be a progressive Christian today apart from the simple faith and faithful folks of my childhood.

Fundamentalism still speaks to many people today because of its simplicity. The formula is easy: accept Jesus as your savior and you will be saved; confess your sins and you will be forgiven. While fundamentalists believe many things beyond scripture, their mantra is "the Bible says it, I believe it, and that settles it." Authority is simple and clear: just read the Bible, the clearly written directions. And that's where we part company, despite my gratitude for those who nurtured my childhood faith. Fundamentalists like simplicity, but God cannot be confined by a word, a book, an experience, or a doctrine. God is more than we can imagine, yet as close as our next breath.

I recall once seeing a jar of instant coffee on the cover of a book entitled Instant Answers for the King's Kids. Well, I don't like instant coffee, and instant answers don't satisfy a mind steeped in interfaith dialogue, pluralism, and quantum physics. I like my theology like my coffee, rich and strong -- Peet's or Green Mountain or Starbucks. Life is more than formula, and though many things in life are simple, honest theological seekers have to respond, as they seek to understand faith in a pluralistic, post-modern age, with the words, "It's complicated!"

Fundamentalists have a low tolerance for ambiguity. The Bible they believe in is clear, straightforward, inerrant, and has a solution for every problem. But, the Bible I trust is anything but simple and straightforward; it's complex, many-faceted, contradictory, and defies proof texting by liberals and conservatives alike. Fundamentalists are certain salvation is limited; yet a clear reading of some passages supports universal salvation. "God will be all in all" or "Just as all died in Adam, all will be made alive in Christ" are explained away as applying only to believers. Passages on homosexuality are accentuated among fundamentalists as if it's the greatest abomination to God and humankind, while the more frequent passages on economic injustice and neglect of the immigrant and the vulnerable are downplayed. Fundamentalists harp on a six-day, young-earth creation, when the evidence points to a multi-billion year process of evolution.