A Ruling That Could Unleash Anti-Free-Speech Efforts 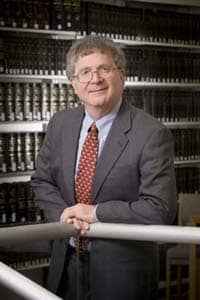 We interviewed Michael McConnell in May, shortly after he had argued CLS v. Martinez before the Supreme Court. CLS v. Martinez considers a case in which a public law school denied official student group status to the Christian Legal Society because it required its voting membership to affirm a statement of faith -- a statement that says that sex should be reserved for a marriage between a man and a woman.

Throughout the litigation process, there was confusion over what exactly was the policy that the Christian Legal Society had offended. In the litigation process, Hastings clarified that they held to an "all comers" policy, in which all students should be permitted to become members in all student groups. Christian student groups could not, in other words, limit its membership only to Christians, or only to those who affirm the same creed.

The Supreme Court decided in favor of Hastings, and judged that the "all comers" policy is not an unconstitutional abridgement of the First Amendment. Refer to our interview with McConnell for more information, or to the rolling reports at the Cross and Culture blog.

Judge McConnell made himself available for a follow-up interview, in order to share his perspective on the ruling.

How do you interpret the impact of the ruling?

Essentially, the court declined to rule on most of our arguments, so the impact is that there will be a lot more litigation in the future. We certainly have not lost on the important questions in the case. The court declined to reach the written non-discrimination policy that says that religious organizations cannot discriminate on the basis of religion. They did not reach that at all. The four justices in dissent all said that this is plainly unconstitutional. One justice, Justice Stevens, now retiring, defended it. The others were silent on that. I expect that we will ultimately prevail. I wish that they had reached it in this case, but they did not.

Even the "all comers" policy was only upheld in the abstract. The court remanded on the question of whether the policy has in fact been non-discriminatory. I think the record pretty clearly shows that it has been discriminatory, that it's only been applied to the Christian Legal Society and not to other organizations that similarly restrict their membership and their leadership.

I expect that we will prevail. It's just going to be a lot longer slog than we had hoped it would be. And nationwide, a number of universities are going to look at this and see whether it's going to be a way to shut down organizations that they don't want to put up with. That means there will be litigation all over the country.

Yes. And I think the record is pretty clear that it was applied in a discriminatory matter. Justice Alito's dissent recites a lot of the evidence.

The mandate of the Supreme Court will be entered in a month, and I would think we would be going back to the Ninth Circuit as quickly as possible.

Why was that not decided in this case? Was it because you wanted to focus on the facial challenge by arguing that this was unconstitutional even in the abstract?

I'm not quite sure why the courts did not look at it. We have argued it all along. The district court had three holdings. One was that it is not a serious burden on our constitutional rights to be excluded from campus. The Supreme Court did not support that at all. There's some discussion in Justice Ginsburg's decision about how modern changes in communications make it less important, but I don't think that that's the holding in the case.

The second holding of the district court was that it would not hurt CLS to have to admit leaders and voting members who do not share the creed. The Supreme Court did not support that at all.

Then the third holding was that the state university has a compelling interest in enforcing a non-discrimination policy. Well, that essentially falls by the wayside. There is no non-discrimination policy at stake; there is only the "all comers" policy. So the district court did not address any of this because it went off on different grounds. The Ninth Circuit didn't address it because it was a two-sentence opinion that didn't address anything. So we're back to asking them again to do what we had asked them to do in the first place.