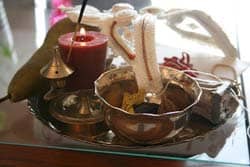 In Hinduism, as with most religious cultures, samskaras are sacred ceremonies performed with the help of a priest and in the presence of family and friends. Traditionally there are twelve samskaras, but some later traditions raise this number to sixteen. In practice, however, there are only about eight samskaras that are regularly performed. This number varies from family to family and from region to region. The most common ceremonies are a pre-birth ceremony (Simantoyannayanam), the name-giving ceremony (Nama Karana), a first grains ceremony (Anna Prashanna), the first hair-cutting (Mundan), starting school (Vidyarambhana), the thread-giving ceremony (Upanayana), marriage (Vivaha), and the funeral (Antyesthi). As I briefly describe these ceremonies, be aware that there is a lot of regional variation, and how a ceremony may be performed in one community may vary a lot from how it is performed in another community.

Simantoyannayanam is a ceremony performed either in the fourth, sixth, or eighth month of a woman's pregnancy. It is done for the protection and health of the mother and the unborn child. Today we might compare this ceremony to a baby shower. Literary, it means "parting of the hair." A priest is invited, mantras are chanted, and a fire ceremony (havan) is performed as the husband parts the hair of his wife and places vermilion in the parting of her hair. Family members and friends come bearing gifts for the mother and the coming newborn. After the ceremony a meal is served.

Nama Karana is the name-giving ceremony performed after the birth of a child. Traditionally the name is not supposed to be given until the 11th day after the birth, but because Western hospitals demand a name on a birth certificate within hours of a birth, a name has to be given without the actual ceremony. In many cases immediately after a birth a family member will contact an astrologer or priest so that a horoscope can be prepared and a name determined according to the deals of the astrological chart. In this way a name is determined and legally given, but the religious samskara is not performed until much later.

The next ceremony is the anna prashanam or the ceremony of "feeding the grains." This is the child's first solid food, generally performed in sixth month. A child is brought to a temple, or a priest is invited to the family's home, and along with mantras and a sacred fire, food (usually a sweet rice preparation) is offered to God through the fire and "made" into prasada. The prasada is then fed to the child. In other words, the child's first solid food is prasada, spiritual food.

After the first grain's ceremony, the Mundan or first hair cutting is the next samskara that may be performed. Different families perform this ceremony at different ages, but the ideal time is when the soft spot in the skull of the child vanishes, usually around 14 months. As in all samskaras, family, friends, and a priest get together in the home or in a temple. Mantras are recited, a sacred fire is evoked, and the priest with the help of the father or maternal uncle cuts small locks of hair from four sides of the child's head. After this ritual cutting, the child is taken to a barber that comes just for this occasion and the child's hair is completely shaved. There is a belief that the first hair from the time of birth is impure and so shaving it off is a purification, but more importantly, the real point of the samskara is that it is a sacrifice. The parents of the child sacrifice the beauty of their child by shaving their child's head, and in exchange they ask God for long life and prosperity for their child.