Searching for Normal in Hebron 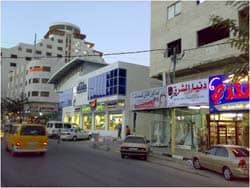 It's noon on a blistering bright August day in the northern part of the West Bank city of Hebron. I've joined a crowd of some 200 Palestinians crammed into the lobby of a renovated two-story building on Ain Khairadeen Street for the grand opening of the Plaza Shopping Center. There are silver, blue, and yellow balloons, a host of local dignitaries, and gift bags with digital clocks for each guest. There's a clown and a man in a brown animal suit of indeterminate species and dozens of smiling children in baseball caps and T-shirts, none of whom would look out of place at the Mall of America.

First there's a guided tour of the Bravo Supermarket -- wide aisles, spotless floors, fruit and vegetable displays, bakery and butcher counters, and plastic shopping bags in Arabic and English pledging to meet "All Your Needs." Then the dignitaries swing upstairs to see the Jungle -- a children's playground with rides, games, and toys. Afterward, everyone gathers in the conference room for the requisite speeches. "We all know how difficult the economic situation is, the security situation is," the mayor of Hebron, Khaled Osaily, tells the crowd. "It's all connected. The private sector is the only way to improve the economy."

Osaily's company put up the $2 million to complete this project, and his son -- dressed like his father in a dark suit, white shirt, and shiny silk tie -- is its manager. The supermarket will provide 100 jobs, a drop in the bucket in a city of 170,000 where unemployment exceeds 50 percent. But the mayor, in office for three months, is a pragmatist impatient for progress. "I came with a vision," he says. "To show Palestinians there is another model of life in the world, a normal life."

The fact that a Western-style shopping center is opening anywhere in the Israeli-occupied West Bank is unusual in a time when the Palestinian economy is mired in decline. That it's happening in Hebron is nothing short of remarkable.

For nearly four decades Hebron has been a flashpoint in the Israeli-Palestinian conflict. While there are Jewish settlements alongside many Palestinian communities in the West Bank, only in Hebron do settlers live in the heart of a densely populated Arab city. They are among the most fanatical and intolerant of Israelis -- some openly celebrated the massacre of twenty-nine Palestinians in February 1994 by Baruch Goldstein, a Brooklyn-born settler. By the same token, many Palestinians here have been radicalized. Candidates for Hamas, the extremist Islamic political movement, took all of Hebron's nine seats in the 2006 legislative elections -- eight of them are currently in Israeli prisons. It's fair to say that, in terms of the conflict, Hebron is the worst place in the West Bank.

So it was surprising to see normal life attempt to assert itself here. I've been traveling to Israel as a journalist for nearly thirty years. I've covered two intifadas and witnessed shootings, suicide bombings, profound suffering. A single headline could run above most stories from Hebron: The Conflict Rules. Whether you're a Palestinian shopkeeper, truck driver, farmer, or student, forget about having a normal life. The conflict has other plans. Israelis have it a bit smoother, but far from normal. If you're an Israeli, you put up with security guards, bag searches, and the gnawing possibility that the person walking behind you may be about to blow both of you to kingdom come. Sooner or later, the conflict will come looking for you, screw up your day or your year or your life, kill you or someone you love.

After years of writing about the remorseless power of the conflict, I longed to celebrate the power of normality. And where more challenging to begin this search than in the most conflicted place of all?

Like Jerusalem and Rome, Hebron is built on hills. On the side of one of the hills in the heart of the city is the Cave of the Patriarchs, the reputed burial site of Abraham, Sarah, and the other founders of the Jewish faith. Religious Jews consider it to be, even more than Jerusalem, the cradle of Judaism. But Muslims, who venerate the same patriarchs, claim it as well.

For many centuries, a small group of devout Jews lived peacefully alongside their Arab neighbors. Then in 1929, Arab rioters inflamed by unfounded rumors about threats to mosques slaughtered sixty-seven Jews and forced the rest of the Jewish community to flee. After Israel's triumph in the 1967 Six-Day War, Hebron was one of the first places in the West Bank targeted by Jewish activists for re-settlement. A group led by a little-known rabbi named Moshe Levinger posed as Swiss tourists and rented rooms for the week of Passover in 1968, in the Arab-owned Park Hotel. When the holiday ended, the settlers refused to leave. They squatted in the hotel for more than a month until Israeli officials -- many of whom sympathized with the settlers' goals, even while deploring their methods -- agreed to house them within the more secure confines of Israeli military headquarters.