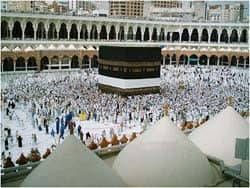 Al-Hajj (Pilgrimage to the House of God and Mecca). Belief in the Oneness of God is the most fundamental principle of Islam; Prayer regulates the believer's relationship with God; Zakah controls his relations with society; fasting exercises and strengthens his will: the Hajj offers Muslims, as one nation, the opportunity to exercise the high principles, values, and objectives upon which Islam bases the shaping of the individual and the nation. It is the climax of the individual's spiritual life and an embodiment of the unity of the nation, which is based on a brotherhood in the faith that towers above narrow considerations or race, nationality, color, or tongue. In this light we can see the following functions of the Hajj that complement the functions of the other pillars of Islam:

(a) A psychological and spiritual function: The Hajj is an exercise of the will of the believer at its height, where he rises above day-to-day preoccupations and casts off what men ordinarily cherish. Thus we can understand the deep symbolic meaning of the clothes he wears during ihram (the state of consecration). They symbolize his inner state that makes him leave behind his family, home, wealth, position, and everything dear to him. With his free choice, he leaves the good things that were lawful to him and enters a spiritual haram (sanctuary) that he sets up within himself before he enters with his body into the haram in Mecca. The stations at which pilgrims must stop to enter the state of ihram serve to remind them of the inner renunciation of worldly preoccupations so that their pilgrimage may produce its desired effect.

(b) A moral, behavioral function: The stations of the Hajj are entrances through which pilgrims pass coming from every distant quarter, returning to the sacred House whither the message of Truth was imparted to Muhammad. In this blessed land, the Muslims meet to live a spiritual life on a special level, enacting a rite that exposes the exalted value of Islam and where equality, brotherhood, and unity among the faithful are embodied, where response to the call of God comes before any other call: "And proclaim among men the pilgrimage: they shall come to you on foot and upon every lean beast; they shall come from every deep ravine" (Quran 22:27).

The Hajj is a unique gathering that gives the pilgrims an experience unavailable to them at home in their usual life. In Hajj there is an exercise of strict self-discipline and control where sacred things are revered and the life of even plants and birds is made inviolable and everything lives in safety: "And he that venerates the sacred things of God, it shall be better for him with his Lord . . ." (Quran 22:30); "And he that venerates the Symbols of God, it surely is from devotion of the heart" (Quran 22:32); "And when We made the House (at Mecca) a resort for men and a sanctuary . . ." (Quran 2:125).

(c) A rigorous training in self-control: "The pilgrimage is in the well-known months. He that undertakes the duty of the pilgrimage during them must abstain from coition, ungodliness and acrimonious dispute, and whatever good you do, Allah is aware of it. Take provision (from it) for yourselves, for the best provision is piety" (Quran 2:197). "Take provision" indicates that the effects of this experience should extend to the conduct of the Muslim in his normal life afterward, and that he should live and conduct himself by the values that manifest piety, "the best provision."

(d) A social function: this has many aspects and dimensions in the life of Muslims as a nation. The Quran points to this function in the Hajj verse cited above: "And proclaim among men the pilgrimage: they shall come from every deep ravine; they shall come to witness things of benefit to them and mention the Name of Allah." "To witness things of benefit to them" is a general expression that covers benefits to individuals and groups in the religious and worldly spheres.

The fact that it is placed in the verse before mentioning God's Name (which is the foremost objective in the devotional act of Hajj) is intended (I think, but God knows best) to dispel any thought that acquiring benefit from trade, for instance, necessarily contradicts the spirit of the Hajj. What we deduce from this verse was explicitly stated elsewhere in the Quran: "It is no sin for you to seek the bounty of your Lord . . ." (Quran 2:198). The expression, "seeking His bounty" covers, in other usages, benefits from trading, as in ". . . and others travel in the land in search of the bounty of Allah . . ." (Quran 73:20). The only condition is that such worldly benefits remain a secondary objective and not a diversion of the spiritual meaning of the Hajj. The desired balance is maintained in the verse by using the concessionary expression, "It is no sin for you . . ."