The Weight of Priesthood

Mormons experience a variety of rituals and rites of passage, such as baptism and confirmation, receiving and offering blessings, taking the Lord's supper, and other rituals such as the endowment and marriage. Here Stephen Carter thinks back on his own experiences with these. This article originally ran in Dialogue: A Journal of Mormon Thought 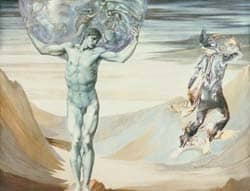 I was eight years old one March Sunday. The chapel curtains were bright with the springtime sun, as if angels were standing outside. The church itself was new, built only a year or two before out in the middle of some farmland. Cows were the closest neighbors. The brown bricks and stoic wood paneling gave the building a solid feel -- unlike my stomach, which was clutching and jerking. One of my buddies, David, was sitting on a chair at the front of the chapel, and large, suit-coated men had gathered around him. I was next in line.

My whole extended family had come to see me. After all, I was one of the first grandchildren to go through a confirmation. Later we'd all get together at our house and eat sandwiches, but first, I had to take the hot seat. I was a little frightened. But it was a fear that had never entered my heart before. I knew the metallic pang from the anticipation of a parent's wrath. I understood the snatch of panic when older kids came after me. But this was the first time I had the fear of God in me.

Is that what you call it? Fear? I can't call it respect or awe; those seem passive nouns. I need something active to describe the feeling of coming up against the major powers I had heard about all my life. Fear is when you are going to do something and you don't know exactly what will happen as a consequence. It's when you wonder if you are in over your head. When you wonder if you might lose something. Or be crushed by what you are given.

Weight. Yeah, there was a lot of weight to this whole process. It had started the day before that fateful Sunday when I stuck my toe into the baptismal font water, warm as amniotic fluid. I felt the pull of the water as I walked down the stairs. The legs of my white jumpsuit flowered out, and air blew out of my collar as the water gained ground. By the time I had hit the bottom step, I was in almost up to my chest. It was a little hard to breathe. I had to hold my arms up to keep them clear of the water. My dad took my hands in the way we had practiced. I looked up at the mirror that hung over the water. It was there to help the people in the back see what was going on. It gave them a bird's-eye view. Kind of like how God was seeing me, I guess.

Dad held his arm to the square and said a short prayer. It told me that I was being baptized by someone who had authority from God. Then I went down. The idea, I was told, was to bend your knees and lean back. Kind of like doing the limbo. That way none of your hair sticks up, or your belly. You have to be totally immersed; otherwise you have to do it again. And as even an eight-year-old knew, a second time is anti-climactic. Under the water, I heard the gabble of bubbles and a rushing sound. I felt completely alone. Then I thought, "I wonder when I'll come up again?" and the world exploded around me. I was back with water in my eyes and the jumpsuit clinging to my body. I couldn't see much at all. Not even all the little kids that had scooted to the font so they could see better. I stumbled out of the font. Pure.

Well. That was it, I guessed. I was clean. No sins clung to me. It was a pleasant feeling for a second or two, until I started shivering in my wet clothes. My dad led me into the changing room where David and his dad were . . . well, changing. I had not anticipated this situation. The last time I had been anywhere close to naked in the church was two months before when I had made my trial attempt at using the standing urinal, not realizing that one did not have to pull down one's pants in order to use it, though the people waiting in line may have understood that principle. But that was behind me now. I was clean. Except for the fact that I had to take off my jumpsuit and change into clean underwear in front of three other people. I shot a furtive glance at David. He was watching me out of the corner of his eye, suited and shivering like me. I looked at my dad, hoping for a clue. Hmm. David's dad seemed to be doing the same thing. I had never seen so much hair in such unexpected places. Perhaps I could study the tiles and make conversation until everyone was done changing -- except that Dad was patting me on the back and telling me to get moving.