This is the fourth installment in our Changing Church series at the Mainline Protestant Portal. 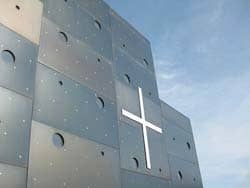 In his book The Evolution of God (2009), Robert Wright argues that as societies and religions encompass an ever-increasing number of people, claims to exclusivity with specific doctrines tend to relax. This occurs primarily because selfish motivations need space to cooperate and "play nice" with others who may have exactly what one needs at any given time. If someone has something that you need from them, it is a far better position to cooperate with that person even if you don't like them than to reject them and their resources.

When people see themselves in a zero-sum relationship with other people -- see their fortunes as inversely correlated with the fortunes of other people, see the dynamic as win-lose -- they tend to find a scriptural basis for intolerance or belligerence (though, as we've seen, if they feel hopelessly outgunned, sure to wind up on the losing side of any conflict, they may keep their hostility suppressed for the time being). When they see relationship as non-zero-sum -- see their fortunes as positively correlated, see the potential for a win-win outcome -- they're more likely to find the tolerant and understanding side of their scriptures (Robert Wright, The Evolution of God, p. 410).

In times where economics demanded individual households to play nice with each other, not only for the common good but to better the interests of each household, this kind of cooperation was clear. If you have the best corn grain and fields in town, naturally you also want good plows. Even if you despise the local blacksmith, your tendency would be to put aside your differences in order to exchange the goods and services you both need from each other. The blacksmith needs to eat and you need good plows.

As Rodney Stark has argued consistently, the U.S. religious environment is based on a kind of zero-sum game. People will choose the religion that suits their needs best and stop going to those that do not. As the supply of religious communities expands to meet diverse needs, the overall religiosity of the society will remain strong, even if different. This kind of theorizing has lead people in mainline churches to question their relevance in a changing society. Are they meeting the religious needs of their society any longer?

Let's think about this question using Wright's application of game theory to religion. Since the time that H. Richard Niebuhr wrote The Social Source of Denominationalism, it is increasingly clear that the differences between once clearly demarcated mainline traditions have attenuated. While many church leaders and clergy in the Episcopal, Lutheran, Presbyterian (USA), United Methodist, and United Churches of Christ among others may continue to see profound differences in the traditions, is this the case of the average layperson in the pews? If these traditions are closer to each other more now than ever in terms of the kinds of people that would attend and/or join, the overall pool of potential attendees and joiners gets pushed into the same pool. The net effect is that all of these denominations, much less congregations within each denomination in localities, are all after the same group of people in order to try to reverse the persistent trend of membership depletion.

Much of the talk in mainline churches seeking relevance is about becoming more "missional" or creating new programs like "contemporary" worship or the use of coffee houses or even bars to meet the perceived changing demands of a society with more differentiated desires. But if each church is doing these kinds of things independently and working on the same group of people, each of the congregations puts their self, perhaps unwittingly, in a zero-sum relationship with other churches. Each local church is starting up the same programs to go after the same pot of shrinking people. But is this the best strategy?

If we apply Wright's nonzero theory, the answer is no. As more conservative churches continue to break off from mainline denominations, as in the case of the Episcopalian and Presbyterian Church (USA), the administrative umbrella remains the same, with a dwindling population underneath it. As this happens, churches under that umbrella compete for the same population. The result in these conditions is to put the "other guy" out of business or die off. From the perspective of free market economics, this is a tested and true business practice. Have a better product and more effective marketing to increase market share by beating the competition.

About Andrew Tatusko
Andrew Tatusko is an academic administrator and grant activity director at Mount Aloysius College in Cresson, PA. He also earned the M.Div. and Th.M. degrees from Princeton Theological Seminary where he also was awarded the Fellowship in Practical Theology....