"You Cannot be an Equal Participant in the Marketplace of Ideas" 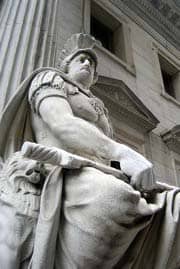 The Supreme Court issued a decision this morning in Christian Legal Society v. Martinez, an important case that addresses the relationship between student groups, especially religious student groups, and state universities. The case began after the Hastings School of Law, associated with U. C. Berkeley and the California higher education system, determined that the Christian Legal Society should not be granted recognized student group status. The Christian Legal Society required students to sign a faith statement, and this, Hastings argued, discriminated against students who did not share those beliefs. Included in the faith statement was the traditional Christian view of marriage between a man and a woman, so Hastings believed that this policy discriminated against homosexuals.

The court ruled in favor of Hastings, but in a limited manner. The justices ruled in a 5-4 decision that the "all comers" policy itself is constitutional, and not an abridgement of First Amendment rights of religious association. Yet they remanded the case back to the lower courts to determine whether the "all comers" policy was applied neutrally, or whether it was used in a discriminatory manner to single out the Christian Legal Society.

David French is senior legal counsel for the Alliance Defense Fund, which crafted the litigation alongside the Christian Legal Society.

I want to see whether you agree with the way in which Justice Ginsburg frames the issue in her decision. She writes that the Supreme Court has generally, in Rosenberger, for instance, affirmed that universities cannot discriminate against student groups on the basis of their religious beliefs. Yet this case, she says, "concerns a novel question regarding student activities at public universities: May a public law school condition its official recognition of a student group -- and the attendant use of school funds and facilities -- on the organization's agreement to open eligibility for membership and leadership to all students?" Do you agree with the way in which the issue is framed? Is this a "novel question"?

We would say it's not a novel question. The right of a student organization to form and exist on campus was decided a long time ago in the Supreme Court, in the Healy v. James case, when Connecticut State College had thrown the Students for a Democratic Society off campus. There the Supreme Court said that there is a "free association interest" in student organization recognition. In other words, this is a part of your free association right. So, I don't think it's novel at all. In fact, we argued strongly to the court that the Healy case was the leading case here, and should dictate the court's decision.

Unfortunately, Justice Ginsburg didn't quite see it that way.

How are traditional non-discrimination policies and the "all comers" policy materially different?

So a non-discrimination policy actually does not ban all kinds of discrimination; it allows some kinds of discrimination. The way it has worked on campus is that student groups are typically allowed to discriminate on the basis of creed or political persuasion or ideology but not religion. That means the college Democrats can make sure that they remain Democratic, but a campus Christian fellowship cannot maintain a distinct religious viewpoint. So in other words, as a practical matter, one student group has greater free association rights than another.

What the university did in this case is prohibit any form of any distinction, any form of membership criteria to join a group. If you're a student, you must be allowed to join. So they essentially obliterated all free association rights for all student groups. Whereas in a typical non-discrimination policy you can discriminate in areas other than the prohibited areas, in the "all comers" policy you cannot discriminate at all.